Historically, I haven't been one for 'loaded' dogs. I have only recently made the foray into adding things like relish and mustard to a hot dog, instead of just sticking to ketchup or BBQ sauce. But (and Man v Food probably has a lot to do with this) recently I've warmed to the idea of adding toppings to hot dogs in the same way you do to burgers. (Chicken burgers - I am not fond of the beef variety.)

It was on one Food Network program that I saw The Dogfather and added him to my list. He operates a stall and sitting area on North Cross Road market in East Dulwich. Not exactly close to me but I am willing to travel if I think the payoff is worth it. I'm happy to say that it was.

The Dogfather is very popular, and even though each hot dog takes only a couple of minutes to rattle off, he had such a backlog that I had to wait nearly 30 minutes for mine. I ordered two - a plain dog, so that I could judge it on its own merit, without other flavours masking or enhancing it, and a Dogfather to see how well it stands up to other toppings and if adding such toppings makes sense. The Dogfather comes with chorizo slices, mozzarella, sprinkles of jalapenos, onions, red pepper marinara and some parmesan savings. I also added a piquant chipotle relish to this one. On the plain dog I kept things simple with just traditional ketchup and American mustard.

I have to say, they were a bargain at 3 pounds for the plain and 4.90 for the Dogfather.

They were also huge. Bigger than I'd anticiapted even having seen people eat them. I was full after the first one (the plain one) and had to wait until I'd walked to the station before I felt I had enough room to cram in the second one, especially as it had all that extra volume. 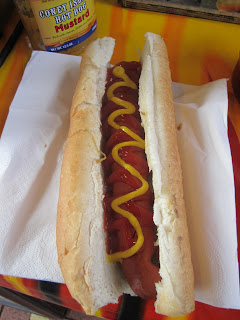 Before I had even really bitten into it I knew this was a REAL hot dog as it entered my mouth (saucy!), and not just a sausage in a bun. I don't know what the difference is between them but there is one and you can tell. It was as if the flavour had hit me before a morsel had touched my tongue. This was a proper American hot dog, working perfectly with my chosen condiments. It was meaty with a bit of a tang to it. The bread was soft but a normal bread bun like you might get at Tesco for BBQs, and I thought there was probably a little too much of it. However, I suspected that if you had a fully loaded dog of some sort, then this much bread was a necessity, and I was right in this regard.

In terms of hot dogs, this is the real deal, reminding me of NYC corners. 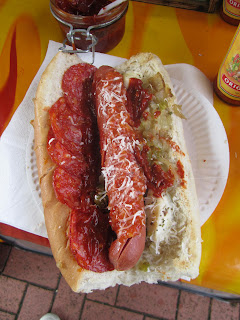 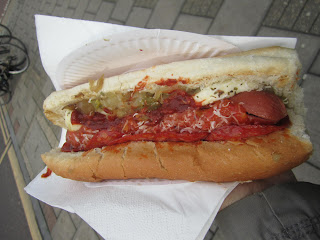 After a brief respite, I started in on the souped up version. It was good. Oh so good. It kind of didn't feel like I was eating a hot dog, more like a pizza in a bun. All of the ingredients were holding up well against each other, the mozzarella nice and squidgy from having been melted down a little on the grill before being added. The chipotle sauce went really well with this too - gave my mouth and extra tingle beyond the jalapenos. And I'm happy to say that the hot dog wasn't too lost amongst all this. It took a bit of a background role, but the texture it added reminded you of its presence, and if you took a moment to think about it, you realised you could taste the beefiness in every bite.

I got this far before hitting The Wall and having to stop before eating the rest when I got home. 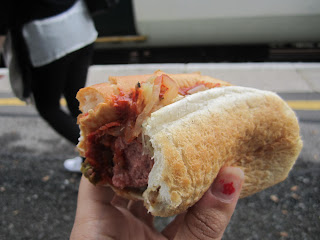 I probably won't be back for a while, as it's such a trek from mine and I have Big Apple Hot Dogs which are more convenient from me at home and at work, but it's good to know there's another person out there doing hot dogs so well. I probably do still retain my simpler tastes, possibly because I just love hot dogs of themselves so much, I don't need all the extras, but for a real meal, loaded dogs are the way to go, and The Dogfather is doing it right. 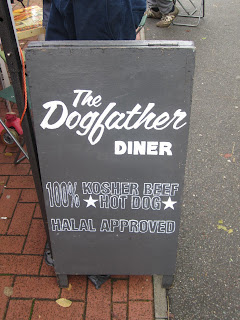 Posted by Ginglesnuff at 1:17 PM