I discovered Foxcroft and Ginger through perusing London Rob Stuff’s blog, in which he quests after the perfect cup of coffee. I’m not really a coffee drinker but the food he described (some cheesy French toast concoction) sounded amazing. It went on the List.

They have two establishments now – one in Soho and one in the Boxpark in Shoreditch. My mum was in town for the day and so I suggested meeting her in Central London and going here for lunch.

While not exactly hidden, F & G don’t entirely shout out about their presence on Berwick Street, you can easily walk past it without realising it is there, especially when it’s slightly overshadowed by the food market that is there in the week.

But it’s worth seeking it out as it’s a cosy little café but with more space than you’d expect if you just peeked in as they also have a downstairs with seating. The look is rather relaxed and slightly ramshackle. You go in and there’s a counter at the back which displays their wares. I asked the girl serving what the sandwiches were, and made my selection from the 6 or so on offer. She named them by the meat or main ingredient inside (lamb, bacon, falafel) but each sandwich had various ingredients inside.

I also ordered an Americano (or long black depending on your origin) for my mum and we sat downstairs and waited for our sandwiches to be brought to us by the friendly waiter. The coffee came first and there was a bit of confusion over whether we could get some milk for it (though I don’t know why this seemed to cause any confusion – I actually blame my mum in this instance) but he went away and came back swiftly with a little jug of milk. 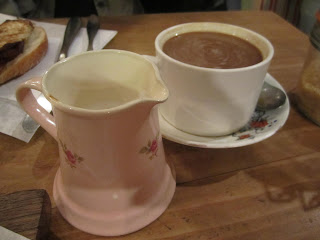 Soon after he came down with our two sandwiches, which we were sharing – one pork, one bacon. The pork was actually pork belly and came with onion chutney and apple, and the bacon also came with onion chutney but was also served with a bed of rocket. Much to my delight they had been lightly toasted. They were warm and the bread had some solidity to it, holding the sandwich together, but it wasn’t overdone; they were easy to bite into without cutting your mouth. The bread was lovely, and the sandwich altogether really good. Sometimes I think onion chutney can be too sweet and I need only smidgeon before I find it overpowering. The stuff they had had been quite copiously applied, but it worked really well with both meats. 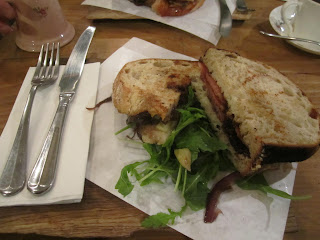 Bacon isn’t my first choice (I know, gasp!) but this was cooked well – overdone rather than under, just the way I like it in fact, so that it is less like a thin piece of gammon and more like crispy bacon. The pork was actually pork belly which was another pleasant surprise and was quickly snaffled by me. Ever unwasteful, and rather partial to salad in my sandwiches, I stuffed all the rocket leaves into both sandwiches which worked a treat. I didn’t have a drink myself and can’t comment on the coffee but they also have carafes of tap water for you to take freely with your meal or drink, which I did.

So yes, a very pleasant lunch at a price that didn’t break the bank – our bill was £13. It definitely encouraged me to come back and try some more – either for brunch or another sandwich or one of the inviting salads, but this time with one of their good looking cakes.

Find the menu & restaurant information on Zomato
Posted by Ginglesnuff at 12:40 PM