We hadn't managed to get to Shochu the night before and I desperately wanted to show Alison it's sleek glamour that made you feel like you were part of the elite (the steep cocktail price helps a lot with this as well) so we went for one in there before heading up to Hackney. We both of course had to go for cocktails with Shochu in them, I went for a Tanuki Peach (the green one, surprisingly) and I can't remember what Alison had! It was pink and fruity but mine was better! 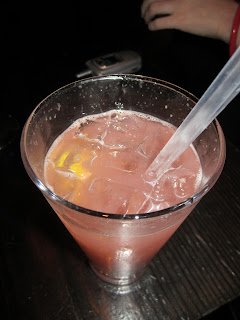 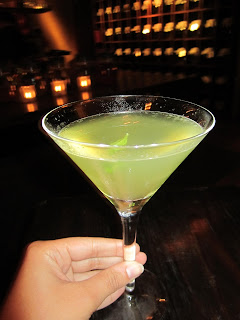 I'd heard of The Dolphin as a bit of a late night Hackney party venue, so it was on my list, and very close to Buen Ayre, also on my list. It made sense to head there for one before going for dinner to see what it was like.

What it was like, was a dive. No one was in there and the jukebox karaoke they keep tweeting about was clearly not being used. But with a few more people in there I can imagine it could have a certain dishevelled charm to it. We only had one drink as we had to get to our reservation but I want to come back here, at a later time, maybe even on the weekend to see exactly what this place has to offer and give it a fair shot. They seem friendly and didn't scowl when Alison and I asked, like pretentious knobs, to try their house wine, or get miffed when we subsequently decided to order something else. Cider, if you're interested.

Anyway, off we went to Buen Ayre. This place has a sister restaurant in Clerkenwell (which is a little pricier and didn't get such good reviews) and is also possibly linked to the Santa Maria del Sur in Battersea. My boyfriend had been to that one and thought it was great, so we had high hopes for this one. I was not disappointed. It's right on Broadway Market and is quite small - you could easily walk past it and not know it's there. Someone had cancelled on me, so there were three of us not four, and we were asked if we minded moving to a smaller table. We didn't. Especially not with the food and service we received. We were waited on by a guy named Chico (I'm not making this up), an exuberant person of Latin descent (so exuberance came as standard). We all decided we had to have steak as that's what it is famous for, and we all went for the sirloin. Even though we suspected the portions would be sizable, we also ordered some empanadas to start. They were tasty but not the main event. We debated about how many portions of chips to order and Chico told us one each would be too much - go for one or two. We all really appreciated his honesty about that, and it was good advice. The steaks were massive (I couldn't picture what 14 oz actually translates to on a plate) and probably would have made a meal on their own. Not that I didn't appreciate the chips - they were great too, crunchy on the outside, fluffy on the inside. We got one portion plain and one with garlic and parsley.

Did I mention the steaks were massive? Massive and FANTASTIC! We all got medium rare and they were perfect for me. Nice char on the top, lovely and tender in the middle, and the chimichurri sauce didn't go amiss either. I couldn't eat all mine. Neither could Alison. My boyfriend, being the strapping lad he is, did finish his, but there were still chips going spare. We declined dessert. I think this is the best steak I've had in London and I'm placing it as #2 in my just now invented list of best steaks, behind the porterhouse at Peter Luger's which I don't think anyone will ever beat. Apologies for the very amateur photographs. 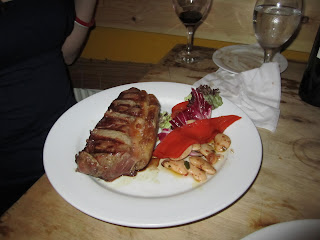 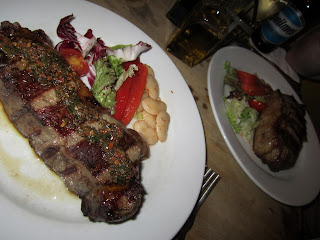 Find the menu & restaurant information on Zomato
Posted by Ginglesnuff at 12:14 PM