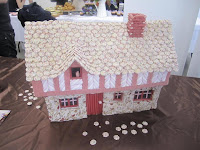 It was pure coincidence that I was able to cross another thing off my list today. Stephen and I bought tickets to the Experimental Food Society’s exhibition at the Truman Brewery. I wasn’t really sure what to expect. I thought some food may be on offer, but I knew it was more about showcasing the different things you could do with food, rather than eating it. They were hosting some kind of feast on the Saturday night where clearly eating would be the main aim but that was £60 – a little out of my price range. The exhibition was a fiver – much more like it. We walked up to the first entrance and were directed to the building where we could get our hands stamped (the exhibition was across three close together sites). I think the exhibition made a bit of a schoolboy/girl error in the set up. The place where you got your stamp was also, by far the best room. It was filled with cake, chocolate and sugar. This in itself is normally good enough to get my seal of approval but even better was what it all looked like. There were actual structures, sculptures and models made out of the stuff. The first thing to greet you was an Eiffel Tower made out of Curly Wurlies and raspberries, then The Flying Scotsman made out of a variety of candy bars, and a candy cottage made out of penny sweets. Giving only a brief glance at the gluten free veggie cakes and brownies (the only thing there offering any samples) the next thing you came to was a magnificent dodo made out of cake. I was mightily impressed with it from my first impressions. This was elevated when I realised that all the delicate little feathers that I thought the baker had taken time to stick in, were in fact made out of sugar. Stupendous! 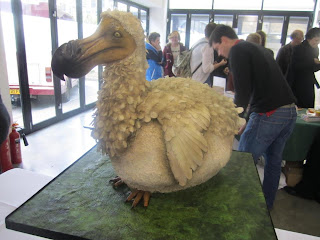 There were also grand owls made entirely out of sugar, and a house and head sculpted out of chocolate. Appropriately awestruck we were looking forward to what was in store in the next two buildings. But first, we needed food. We decided to get a salt beef bagel from The Beigel Bakery as we were pretty much on Brick Lane and as we walked up Dray walk to get there, we passed the ChocStar Van.

The ChocStar Van is on my list. It serves up chocolatey treats, from a van and as it is a mobile establishment, it turns up here and there. You can look up online where it is likely to be on a given day, something I have been meaning to do for over a year now, so I was very pleased when I found it without even looking for it. But we hadn’t even had lunch yet so we couldn’t have dessert and went up to get our bagels. I’m sure everyone knows about the Brick Lane Bagel places. We always go to the Beigel Bakery for our salt beef as I think they’re a tad more generous, but I think they’re run by the same people so they’re both much of the same high quality. And amazingly cheap. They were offering chicken bagels for £1.50 when we went in. We scarfed our bagels down (with just the right amount of mustard for me – just a touch) and eagerly went back to the Exhibition.

Where we were a little let down. The second building we went into was massive but had only a few things in it. One being the only place in the exhibition to sell food. Food I had no interest in eating. They were snackboxes prepared by Stefan Gates, author of The Extraordinary Cookbook and you could sit down and listen to him give a bit of a talk and explain to you what was in the snackboxes and why, as you ate them. Considering the snackboxes contained things like mealworms and cochineal bugs, I was not interested. 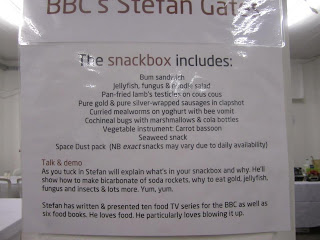 Otherwise, in that room, were some tea infusion things, and some coffee, and the little area where talks etc were being given. On to the next one.

The next one was marginally better than the second but nowhere near as impressive as the first. There was an artist there who does ‘foodscapes’ and I really enjoyed them. There were also a couple of people with samples tucked into dim little corners – one person showcasing unusually flavoured marshmallows, and another with unusually flavoured liquers that also glowed in the dark. We had one of those and it was a bit sweet for me.

There was also some camel milk chocolate you could sample and I had some of that as well. To be honest, thought it tasted like that cheap chocolate you get at Easter or Christmas. And then, finally, there was some edible clothing on show, which was impressive because of the idea behind it and what it was made of, rather than the actual appearance of it.

It was now about 3:00 and we went back to building number 2 to see what was termed half talk half gameshow, presented by some woman’s new incarnation of Miss Mertle or something like that. She was supposed to be a 50s housewife character with upper class pretensions – throwing the odd word in a French accent out there every now and then. I thought she was amusing enough. The format was strange – she got two people out of the audience to be contestants and their job was to dress a scantily clad woman with food that could be found in the fridge and see who made the better outfit. It was surprisingly entertaining. After that was done we went back to the first room for one final look round – people had been hanging up a deconstructed cake on wires that I wanted to see the final result of. It wasn’t yet finished but still looked quite good. And then, what I had been waiting for… ChocStar!

It was pretty cold so we were put off the ice cream sundaes and my boyfriend was with me so I was also put off prevented from ordering lots of different things. He even vetoed my idea of buying a chocolate truffle in addition to the brownie – that we shared. As far as brownies go, though, this was one of the best I’ve had in a good long while. Dense and chewy, but with the delicious crusty top and sides that I think make a proper brownie. I’m not exactly making a list of best brownies, but if anyone were to ask I would recommend this one, the one that can be found in the Hull Library café, and the caramel one from Konditor & Cook.

I really want a brownie now.
Posted by Ginglesnuff at 1:53 PM