Going to a Michelin starred restaurant for lunch for no special reason isn’t something that most people would consider, but I posit that you should when it comes to Pollen Street Social. As it happens, we went to celebrate a friend’s 30th birthday, but I fully intend to return and I’m not going to wait for a special occasion to crop up before I do.

The reason I say all this is because the set lunch at Pollen Street Social is an absolute steal. Two courses are £22.00 and three are £25.50. With wine and service included our entire meal came to just shy of £50 each and we were absolutely stuffed, having thoroughly enjoyed some superb cuisine.

In some places, if you go for the set menu, you might feel you are being relegated to a subclass of diner, as the choices on the menu are limited and sometimes don’t seem to showcase the best of what a restaurant can do. This was not the case with Pollen Street. All of us could have quite happily had any of the dishes on offer for any of the courses and not felt hard done by. Not only that, but we didn’t lose out on having the full dining experience by going for the set menu. By that I mean we were offered the bread basket not once but twice (and yes, I did have some both times), we were furnished with a palate cleanser between main and dessert, and at the end of the meal we were given a delightful mini cake to round it off. As an added bonus, when we booked the main dining area was full and we were seated in the bar area. There were only about 4 other tables in this area, at the back of the room, which made it feel like we had our own private dining area, away from the bustle and noise of the hoi polloi. The only downside being that we didn’t get the spectacle of the chefs at work, or see the dessert bar laid out at the back.

And so, on to the food. We had a choice of three starters – pork knuckle and foie gras terrine with coco beans, squid and sourdough toast; hake with slow-cooked egg and curry rice; and mackerel tartar. Poor mackerel lost out as the five of us found the other two dishes more tempting. I had the terrine (anyone who reads this may by now realise gambling on me having a terrine as a starter is a safe bet). It was an excellent introduction to the standard of the food there. The bread was dense with plenty of flavour and the terrine was much richer than I thought it would be. I think that’s the first time I’ve had foie gras and I think that is what accounted for the luxurious taste. The star of the starters was the egg dish which three of my dining companions ordered. It was presented as a large, gelatinous looking globe of egg with flakes of fish and fried garlic all over it, and then a velvety vivid green soup was poured around it. Stunning. I had a small taste of Stephen’s and it was very silky. 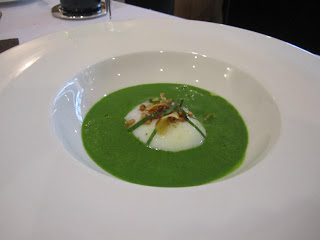 For our mains again there were three choices – a fish dish that no one really bothered to do more than glance at (though it sounded nice), and then two meat options. Ox cheek with salt baked onion, mashed potato and bone marrow, and dingly dell pork belly with spiced pig’s cheek, pear puree and lardo potatoes. Stephen and I had the pork, the others had the ox cheek. I was over the moon that each dish came with a separate mini tureen of jus which the waiters poured over the meat. I love a little theatre at the table. Once again, fabulous food. I did have one potato that, dare I say it, may have been a tad underdone. And the pork belly did not have crispy crackling on it’s top, so if that’s something which would lose it points in your opinion, then be warned.

When the dishes arrived I will admit to thinking – that’s not enough! But as I forked in the last mouthful, I was already getting that slightly uncomfortable full feeling. I could have easily gone without dessert and still not needed to eat until much later in the evening.
But, while we were there... Well, silly not to! There are two main choices for dessert but also a selection of sorbets and ice creams on offer. I had the rhubarb sorbet with pistachio financier and ginger, Stephen had the chocolate pave with vanilla ice cream and smoked vanilla crumb. The other sorbets on offer were mango, passionfruit, beetroot and one other I have forgotten. The ice cream choices were vanilla, chocolate,
milk and honey, and tonka bean. 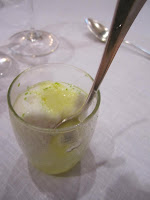 But before we had that, we were proffered our palate cleanser. My biggest regret of this meal is that I didn’t take a picture of this when it was first set down. They had recreated a soft boiled egg. But it was nothing to do with an egg at all. The bottom of it was pineapple granita, there was then a thick layer of lychee foam (which looked like egg white) and this was then topped with  a passionfruit coulis (which look like a bit of soft yolk poking through. It was incredibly refreshing, zingy and sweet. Wonderful.

Finally, dessert was served. I think this may have been my favourite dish of the day, mainly because it was something I wouldn’t normally go for. The rhubarb sorbet was refreshing and the pistachio financier nice and crumbly. Some stewed rhubarb and chantilly cream were some nice added extras.
I didn’t even have any food envy of Stephen’s amazing looking chocolate pave, which tasted as good as it looked. Even the ice cream/sorbets that the others ordered were presented beautifully. Laid out in individual cups nestled in ice like oysters. So, so pretty!

A pumpkin and apricot bite-size cake and the meal was done! 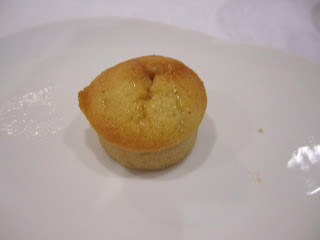 Posted by Ginglesnuff at 1:11 PM