I love me some Mexican food. I am over the moon at the recent surge in popularity of it over here, though still sad that Taco Bell doesn't seem to have taken off. Yes, I know it's technically awful, but it is also delicious!

Anyway, so I am always on the lookout for new Mexican places, and I think I came across Mestizo through Secret London, although funnily enough, Stephen worked up the road from it before we got together and had already been once. But only for a burrito which barely counts.

So, following our newly initiated tradition of eating out and then drinking on a Friday, we decided to try out Mestizo. We bundled up and braved the snow that was just starting to fall. We'd had a look at the menu beforehand which had whetted our appetites but put off a final decision until we were immersed in the restaurant.

The restaurant is warm and Mexican in decor - red walls and red hearts in the windows which I presume were for Valentine's Day. The staff are very friendly, though we realised throughout the evening that they seemed to be markedly clumsy. Especially our waitress who managed to practically throw a fork in Stephen's face, and dropped at least a couple of other things. She also almost took my food menu away from me before I'd ordered but she was very sweet which made up for it. And when we sat down there was already a bowl of homemade corn torilla chips and some tasty, zingy salsa verde waiting for us to polish off in no time. A good start.

There's a lot to choose from on the menu and I thought it all sounded pretty good. I had originally been drawn to the long list of different tacos but we didn't go for those in the end. We decided to get a couple of antojitos, which are starters or small plates. We had a couple of jaladas (jalapeno poppers served with a nice minty sour cream dip) and two pescadillas (like deep fried corn fish tacos). They were both tasty but not exactly out of this world.

For our main we couldn't resist ordering the Molcajete Mestizo. This is like a fondue, but instead of cheese, you get meat. We had the mixed version which meant our bowl of meat contained chicken, beef and pork sausage which was chorizo but to me tasted more like Polish sausage (that's not a bad thing). On top of the meat you get some cheese, some spring onion, some avocado and it comes with tortillas - your choice of flour or corn. We chose flour. The massive bowl came spitting and bubbling to our table. The stone bowl keeps the food so hot that the serving spoons were almost too hot to use. We actually thought the food was getting hotter the more we ate. 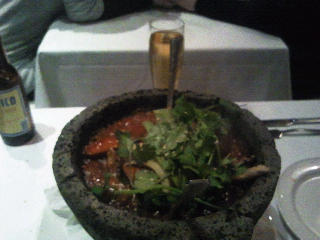 You get about four tortillas each and more than enough meat to fill them. I was quite stuffed by the third tortilla. It was tasty. The sauce it came in was quite a rich, dark, tomatoey sauce. But it was also heavy. And again, I wasn't blown away by it. It's definitely hearty and you can't fault the amount they give you. But I would have preferred more avocado and spring onion, less meat and perhaps a fresh salsa to go in the tortillas to lighten the dish up a bit. And some jalapenos wouldn't have gone amiss.

Stephen wasn't enamoured of the place but I'm not quite decided on it. I think part of the fault lay in our choices - jalapeno poppers are never going to set anyone's tastebuds on fire (though they are pretty spicy). And having what amounts to a bowl of meat for dinner is just unnecessary. I'd like to go back, try out their guacamole (a good test of how good a place is) and go for the tacos like I had originally planned, or maybe one of their platos fuertes (main courses). The mixiote de cordero for example, a shank of lamb marinated in Mexican spices, wrapped in a banana leaf and slowly cooked until tender, accompanied with rice and corn tortillas sounds very appealing.

I also didn't get to have a dessert because I was so swollen by the meat, and I think the sound of their pastel tres leches sounds amazing. I had a donut tres leches in the states once and I still remember it vividly. Dessert is a good a reason as any to give a place another try.

The place was no Wahaca, and not as easy to get to now Wahaca has opened a branch in Westfield Stratford, but I'm not writing it off yet.

Find the menu & restaurant information on Zomato
Posted by Ginglesnuff at 1:34 PM