Are You Sitting Comfortably? 28th January

Continuing the storytelling trend I set by going to Spark London, we decided to go to Are You Sitting Comfortably, another storytelling night, this time stories submitted in advance, again that had to adhere to a theme, but unlike before, decidedly fiction.

I invited a few friends along, and after a quick drink in the Commercial Tavern up the road, we went down to Toynbee studios, where it was taking place. The website had said it started at 7:30, but I didn’t know if that meant doors opened then, or the show started then. We got there at about 7:25. I had also never been to Toynbee studios before so other than knowing it took place in their Arts Bar and Café, I didn’t know what to expect. We collected our tickets and walked in. Clearly doors opened before 7:30 as almost all the places were filled and there was a lot of hustle and bustle as extra chairs were being brought out to ensure everyone had a seat. This was in additon to the toing and froing as people arriving and sitting were hastily asked if they required a chip butty and these were ordered and brought to wherever you had found a seat. Seating was not, as I had imagine, in a theatre or auditorium format, but in fact lots of tables replete with red and white checkered table cloths, with various literary and hipster types chattering in them with their bottles of red wine. Each table had some complimentary sweets in teacups and also some very delicious cornflake cakes, which had the best chocolate to cornflake ratio I’ve ever encountered. We ended up crowded round the front of a table, barely a footstep away from where the stories were being read, tucking into our chip butties, and popping sweets into our mouths.

The theme this night was Ghost stories, our hosts were Gareth and Bernadette, who run White Rabbit and are writers themselves. They write a story each for the night, and then from the 70 or so submissions they receive from amateur short story writers, they pick seven to read aloud to the audience. The little stage was set up to reflect the theme of the night, and Bernadette had bedecked herself in a bit of a spooky costume (Gareth had stuck to a suit) and there was also a screen showing creepy, ghostly images while the stories were being read.

After all the chip butties had been served (they were complimentary, as were the little treats) and everyone had settled, they began the first story. The take on the theme of Ghost stories was quite varied (and I suppose that is why they chose the stories they did). There was one story that I thought was quite chilling, about a woman who discovers the grave of a clown, and who may or may not have ended up trapped and killed by him in the end. There were a couple of stories with the ghosts being the narrator – one an evil lady haunting her manor, surprised when the ghosts of her own children she murdered come back to haunt her, and another with a man telling us what he has got up to since he died (voyeurism mostly), and what life after death is like. One ghost story was almost a love story, and quite moving. Both Bernadette and Gareth’s stories were very entertaining, and you could tell that they were accomplished yarn-spinners. I will never think of Croydon the same way again, not that I thought of it much at all before. They each took turns telling all the stories, with one guest speaker (as there were 9 stories in all, this keeps it fair I guess). 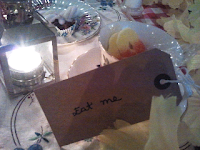 At the end of the evening, it was time for a few little competitions. On the tables in front of us had been pages from a book. We were now invited to guess at what that book was, and whoever did, won a prize. Reading the page I had, I didn’t feel I recognized the text, and yet something within me made me think of The Magus. It turns out it was that book, but I know this because someone else shouted it out, not because I was brave enough to make a punt at it. Then, there was a bit of a general quiz about ghoulish things, you had to raise your hand or shout out the answer to win a prize. And finally, all through the evening we had been invited to write down what we were most afraid of, and the top 5 were picked at the end of the night. I didn’t enter, as I felt writing something like ‘dying alone’ wouldn’t really suit the mood of the evening, and the winners were indeed people with far wittier phobias than mine.

The evening finished at about 10 and we went home. It was a very different night to Spark – you were almost guaranteed the stories would be good, and perhaps even better, that the people telling them knew what they were doing. You were safe with them. It was almost a strange experience – actually being read to. I can’t think of the last time it really happened. It made me wonder whether I ought to give audio books a try. But for some reason, I know they’d really annoy me. Best just stick to Are You Sitting Comfortably.
Posted by Ginglesnuff at 1:49 PM