If you don't know that the crodough, or doughsant or whatever it is that third place that does them is calling it has landed in the UK then you're probably not much of a foodie. And you won't know that it's supposed to be a cross between a doughnut and a croissant and was invented in New York and patented (copyrighted? whatever) so no one else can use that exact name. But three places over here have come up with their own version and one of those places is a bakery that I used to live literally down the road from. I would never have pegged it as a place to bring an NY trend to London and feel bad I used to walk past it with barely a glance. 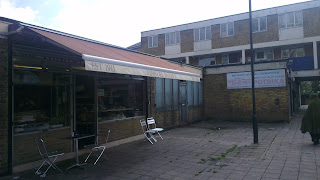 That place is Rinkoff's bakery and it has been going for something like 100 years and is a proper, traditional bakery that, considering how much I loved bread and other baked goods, really deserved my attention before becoming a crodough seller. But I only heard about it due to the crodough and so of course I had to go and try one,

I got there at about 1 pm when it shuts at 2. I thought they might be all out but there were still loads of them! Perhaps the cronut hasn't caused quite the stir I thought it had. There was just one young guy working who seemed kind of sweet if not a little surly due to being at that age when talking to people is kind of awkward.

They had three flavours on offer - custard, raspberry and apple crumble. I got one custard and one apple and Stephen and I shared them. They also had an interesting looking onion bread but there was only so much dough I felt I should eat in a day, and the crodoughs are pretty hefty. And not cheap - my two cost me just under £6. 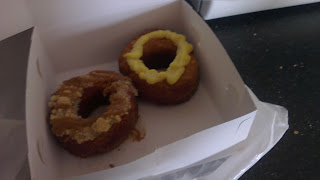 But they were delicious. The outside was ever so slightly overdone I would say, which I liked, and the inside had all the different layers you expect from a croissant. To be honest, I saw someone say on Twitter once that they just sounded like yum yums and I think they have a point! But a lot heavier and more filling. The apple crumble one was by far my favourite. It's going to be hard to resist making these a regular feature, knowing they're only a couple of tube stops away!