I am no stranger to Drink Shop Do. I used to work around the corner from the place and on my first visit went there for lunch and was back again for drinks that night. When I wanted to celebrate my birthday, they had by that time opened Drink Shop Dance in the old sex shop below so this is where we ended up and had an excellent night. I found myself there again for a vintage hen do, where we all had our hair and makeup done while having afternoon tea. But I had never been to one of their ‘Doing’ events so when I was invited for their fifth birthday party I was quite excited.

They’re famed for nights involving arts and crafts or just being silly – such as Doodle Shop, making Lionel Richies out of Rich tea biscuits, and also having lunchtime discos. On their birthday we had a round of Lego robots and then some Musical bingo. I’ve played musical bingo before (though not with Jess Indeedy) so I knew what to expect and it was just as fun as the original night – she played mostly 90s hits that were as fun to dance in your seat to as playing the game of bingo itself. Prizes were such things as pom poms and fake mohawks – what more could you want?

For lego robots the rules were simple – it had to have a name, a special power, and limbs of some sort I seem to recall. I was quite pleased with my half-truck-half-oven creation but didn’t end up submitting it as it kept falling apart. 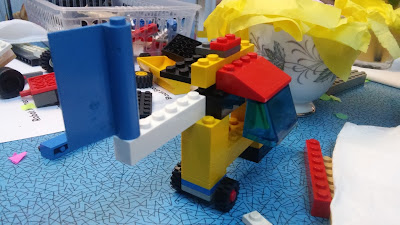 We had been treated to some delicious cocktails throughout the evening (as well as some delightful cakes and sandwiches to soak it up) and also, rather magically, bubbles of gin and tonic! Actually catching these was quite difficult but I managed to get a couple in my mouth. 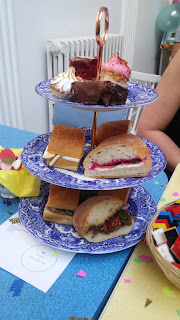 At the end of the bingo everyone made a conga line to the basement where the party continued and I started sipping on some frozen slushie margaritas and dancing around. Hell of a birthday party. And the perfect excuse to draw your attention to my previous post about Drink Shop Do. Here’s to another five years at least!
Posted by Ginglesnuff at 10:48 AM No comments:

Longplayer is a ‘melody’ that lasts a thousand years. Hence the name. More of an art project than a composition, it has been designed to be future proof so that it may be played continuously no matter the technology that arises. Since hearing of its creation I have been intrigued and wanted to get to one of its listening posts. You can tune into it anytime online but I thought being at one of the places it was broadcast physically would be a better experience.

It also provided an excuse to discover Trinity Buoy Wharf with all its artistic oddities and take a stroll along the Lea discovering more things along the way. 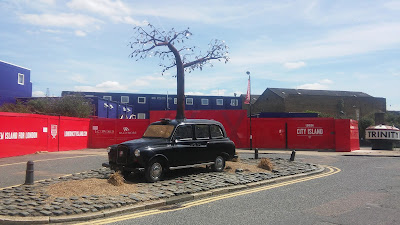 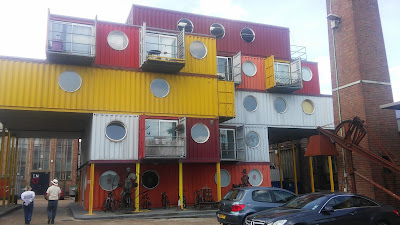 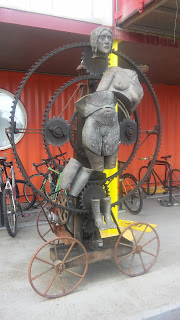 There isn’t much at Trinity Buoy Wharf but it has become a bit of an artists’ hub and there are strange sculptures and artworks all around which I was delighted by. Longplayer is housed in London’s only lighthouse so I think that is worth seeing as well. As you go in, the strange, ringing sound envelopes you, and in front of you is a set of bowls that were used to play part of the song live. The tune is continuously evolving, never repeating, and is a slightly eerie, but calming sound. You go up some stairs and can take a seat and just listen for a while. It was peaceful yet melancholic. 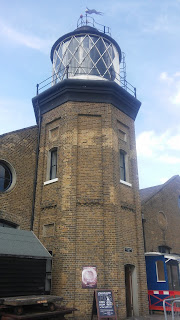 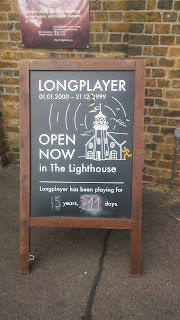 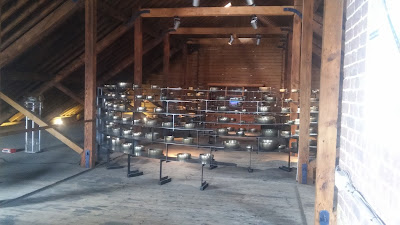 I decided not to get anything from Fat Boy’s Diner and instead get some exercise by walking to Stratford which took me along the River Lea and through some parks and generally lead me to explore a part of London I would never have wandered through otherwise. An excellent day trip. 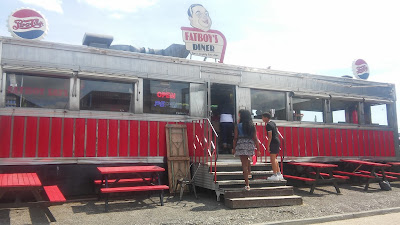 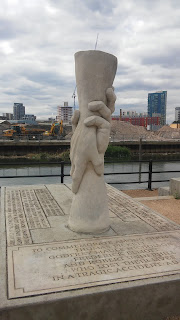 Posted by Ginglesnuff at 2:24 PM No comments:

Email ThisBlogThis!Share to TwitterShare to FacebookShare to Pinterest
Labels: Longplayer, things to do, Trinity Buoy Wharf

Honey & Co – done. Palomar – done. Arabica also had to be done. So I made a reservation for one Friday night to cross it off the list.

It wasn’t quite what I was expecting. Knowing it was borne out of a food truck I expected a more intimate setting but this is definitely a fully fledged restaurant. Though our slightly clumsy waitress gave it the less polished feel I had anticipated!

Choosing what to eat was a task as pretty much everything made my mouth water. But they had a few interesting-sounding dishes that particularly stood out. To start we had a couple of dips and bread. We ordered the whipped feta with Turkish chillies, toasted pumpkin seens and mit, and the hummus with lamb which also came with pine nuts, hook and son ghee.

The whipped feta was as light as a cloud. I now believe all feta should be flaggelated in such a way to be scooped up and spread on bread. There was far too much of both dips for the bread we were given but we kept them on the table and used them to accompany our mains so that we made sure to eat up every last drop. 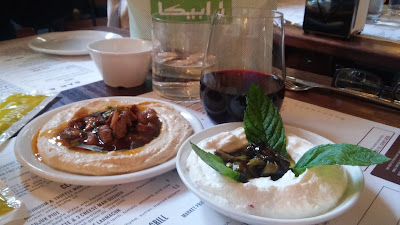 For mains, we had chicken and pistachio shish, which we were warned literally came as is, so also had some Turkish style tomato bulgar wheat pilaf to go with it, and we also got some crispy lamb belly, some chicken wings and a fattoush salad.

The pilaf was the best rice style dish I have eaten and that is not something I would normally get excited about. The salad was as unhealthy as a salad can get, with great slabs of fried crouton in it. I don't normally feel overwhelmed by salad but this was a lot to handle. 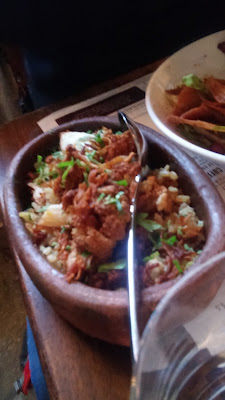 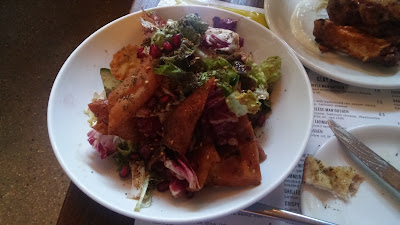 The lamb belly is a dish you shouldn't bother trying to share - deliciously crispy and well spiced with the fat all flavoursome and moreish. 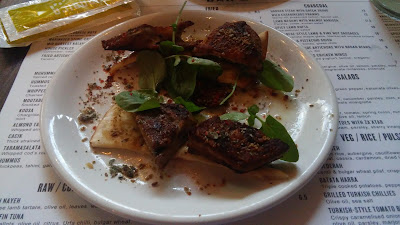 Chicken wings, while I remember enjoying them, were rather in the shadow of the lamb and I'd probably go for something else instead another time. 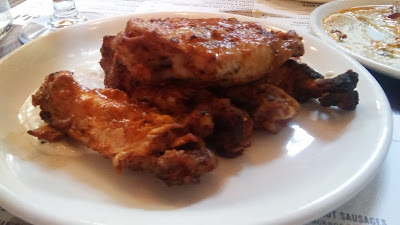 Likewise, the chicken shish was a tasty version - coming with cardamom, honey and green chilli, but could have been a bit spicier, and well, another shish for your dollar (they were £10) wouldn't have gone amiss! 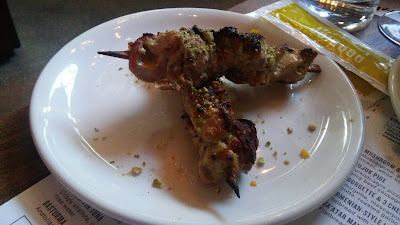 I blame the salad for filling me up too much to try dessert, although there was nothing which shouted out to me to try it despite my fullness. I certainly enjoyed my meal here and would happily return though out of the three places mentioned at the start, it was probably the one I least fell in love with.

Posted by Ginglesnuff at 12:54 PM No comments:

I’m a firm believer in trying most things once and so, even though I wouldn’t in any way describe myself as a ‘Dom’ in the fetish scene, I wanted to see what Club Pedestal was all about. It describes itself as a club ‘for dominant women and those who worship them’ and even if you’re not into the kinky scene at all, being worshipped has got to sound pretty appealing!

Women can wear what they like, men are supposed to dress as if they are there to serve women – if they haven’t dressed up especially then at the very least they need to wear a collar.

I wasn’t sure what to expect beyond the usual play area that such nights have. I knew there was a cabaret show and it’s held at Fire so there would likely be dancing. I know one of the guys involved in it and had been reassured it was a very friendly event. And it was. I had one of the best nights ever there – just being in a setting where women are in charge was incredibly empowering and liberating. I didn’t expect to feel that way but I did and I can’t wait to go back.

We arrived around 10:30. I had thought we had missed the newbie tour they do every time but luckily we got there just before it started off. There are only three rooms so if you haven’t been before and you miss it, it’s no big deal but it was nice to get an overview of the different areas and what to expect, when. The main room is a general area for hanging out but also contains the quite impressive trample frame, where willing subs can line up and allow women to literally walk all over them. Balance is aided by ropes attached to the frame to hold onto. An excellent idea and I made full use of this in my knee-high boots with killer heels.

To the right is the room where the cabaret happens and then the seats are cleared away for a dance floor. After the cabaret they also have a best dressed male competition – happy to say one of my number made it into the final head to head. A bottle of champagne is on offer for the winner.

To the left of the main room is the Goddess room, where women are absolutely in charge. Men may not sit down ever, and they may not even speak unless given permission. I had quite a few guys with me who weren’t submissive in their nature but they fully got on board with the ethos and, I think, enjoyed to a certain degree being able to give up their yoke of feeling like they have to do all the ‘work’.

All the women who went were big fans, so in general it was a massive success. It might push you slightly out of your comfort zone to see the different degrees of subservience – as a woman, expect your feet to be pounced on any time you sit down (with your permission of course), and you may receive the odd request. But you are always, always, free to say no and that goes for the men too – it was stressed that no one should feel under any pressure either way to do anything they didn’t feel comfortable with. So go, and you might discover something you ARE comfortable with that you hadn’t explored before! Otherwise, there is no pressure at all to get involved if you don't want to - it could be just like a regular night out, but with the sound of spanking in the background.
Posted by Ginglesnuff at 2:42 PM No comments: