We got over to Catch at about 6:15. There were only a couple of other people in the place so we were told to just grab a seat and were asked if we were eating. We most certainly were.

I'd done a little research on the place and commonly came across the fact that the burrito was £12 and therefore ridiculously expensive, that the service was pretty poor and cocktails miniscule. None of these things were true of my visit.

I greedily looked at the menu and decided that everything sounded really good. But Stephen wouldn't allow me to order anything other than a main, as it was the day before my birthday and we had 'three days of eating and drinking ahead of us'. Party-pooper. He also came to regret this, as Death by Burrito is rather a misnomer. Perhaps 'Minor injury by burrito' or 'Inconvenience by Burrito' would be more apt. Suggesting that you will die by burrito implies these will be so bursting and so hearty that you'll be rendered incapacitated. In fact, they were probably the smallest burritos we have ever had.

We got one beef burrito for £9.50 and one order of tacos for £6.50. That gives you two tacos so we had one each and split the burrito, which handily came cut in half already. And that was all. I had expected we would also get some blue corn tortillas and quacamole with our mains, as that is what I'd read but I can only assume that the trade-off from reducing the price was that you don't get any extras with it anymore.

The tacos and the burrito were fairly equally delicious. The short rib was perhaps a little drier than other burritos but this could partly have been because the burrito is made up of all meat plus some lettuce - no refried or black beans providing any other moisture. But not having any of these usual extras means the burrito is very compact and not as filling as the ones you get... well... anywhere else. So even at £9.50 the price tag is still a little steep. A nice touch was the shredded sweet potato which wasn't just a gesture but a discernible texture and flavour that complemented the smoky short rib really well. The burrito came with a pot of fiery salsa on the side, which was delicious, but the serving was tiny, and it was in a very impractical container - dipping your burrito in it was quite the task and you weren't provided with any other means of getting the sauce onto anything.

The pork tacos were very juicy, sitting on the right amount of coleslaw. Pieces of crackling were dotted throughout providing a very pleasant crunch, in, I'd say, every other mouthful. For tacos, they were quite generously portioned (compare to the size of Breddo's tacos for example) but only having two of them meant they still weren't all that filling. 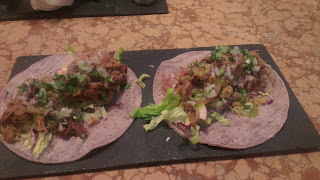 I fear we did not do DBB justice, again succumbing to the tyranny of our waistlines and wallets. Judged on these two dishes alone, the food was very tasty and I wish we had tried some of the other things on the menu. The courgette flower and poblano crepes for instance, or the chipotle poppers on the small plates side (all only £6.00). Yes, the burritos are a little pricier than, say, Luardos or Chipotle but when I'm getting dinner out, not just some food on the go for lunch, I don't really mind a little extra cost. We still only spent about £8 between us on food, my cocktail is what bumped the bill up past the £20 mark.

Must admit, the cocktail I ordered from the DBB menu (see above) was nice but probably not worth inflating your bill for. I had the pink paloma, for £7.50 which was tequila, 'raspberry and aperol charged with homemade vanilla salted grapefruit soda'. I didn't really detect anything exotic about the soda but as I said it was nice enough to drink. Some of Catch's own creations sounded even better, I'd give them a try next time.

Posted by Ginglesnuff at 1:50 PM