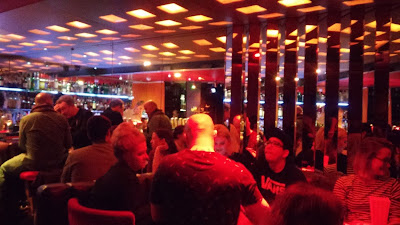 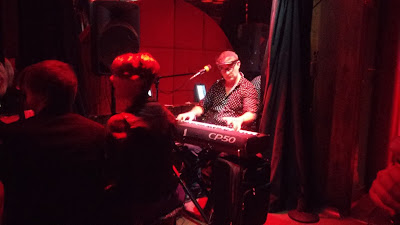 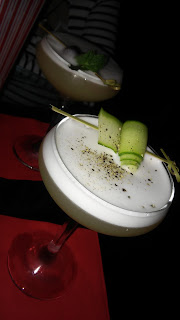 Posted by Ginglesnuff at 12:49 PM No comments:

I was unexpectedly contacted by Dhruv, the man behind DUM Biryiani, newly opened in Soho, inviting me to review the place. He said he liked my blog – clearly he has good taste, which boded well for his new restaurant.

Dum might sound like an odd choice for a restaurant name but Dum biryani is actually a specific dish native to Hyderabadi. So, this is another of those ‘one choice’ places, with either lamb or veg (mushroom, chickpease, and potatoes) biryani being the two choices for mains. With these there’s a handful of starters or sides and we ended up trying all of them except the prawns because I have allergies.

This may sound a little greedy but I had been waiting for my friend for almost an hour by the time she arrived, slowly being driven mad by the tantalising smells though somewhat soothed by the gentle Snoop Doog being played in the background. So by the time she arrived, I was starving, despite demolishing a plate of the masala nuts while I sipped on a cocktail. With the spicy coating it was hard to tell what nuts they were but I definitely spied peanut and cashew and maybe one other. They are fried and coated with a homemade spice mix which was not afraid of some real heat and were completely moreish. Perfect snacking. 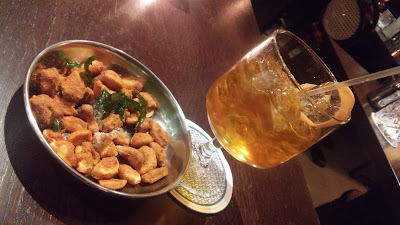 They were all gone by the time Carolyn turned up so we got some of the fried yoghurt (because it sounded so strange) and also the black chickpea salad. I wasn’t sold on the fried yoghurt, but I don’t actually like yoghurt anyway so perhaps that’s no surprise. I certainly preferred it in this form – it was a bit like fried cottage cheese/paneer and I loved the curry leaf sauce it came with. But not something I’d choose to eat again. 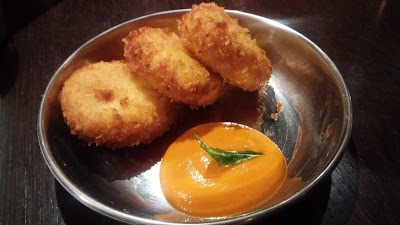 The chicken wings were superb. They must have come from some mammoth birds and were piled high with grated, crispy ginger – not the sort of thing to take a mouthful of on its own, as I did, but a fantastic kick when eaten with the actual wing. These were plenty spicy but not so spicy it becomes a challenge to eat. So, just right in my opinion. I would have happily eaten another plateful. 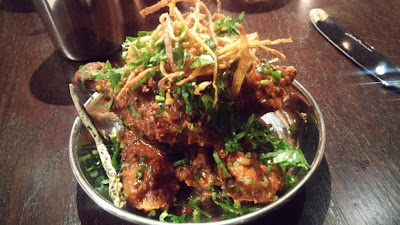 The salad was light and zingy, and did act as a refreshing coolant to the wings I was eating alongside. I wasn’t sure about the firm texture of the chickpeas, but again, full disclosure, I don’t generally seek chickpeas out so I’m not their biggest fan anyway. 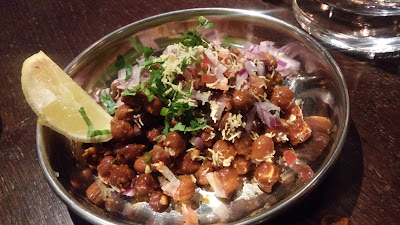 And so, soon after, the main event was brought out. At first glance it looks like a pot pie, but no, underneath that (really rather tasty – loved the nigella(?) seeds) was the biryani. This is superhearty. Mine had chunks of lamb throughout and a big bit of lamb on the bone which fell off with the merest prod. There was a lot of rice. A lot. You could easily share this if you also want to have most of the snacks, or have one each and only share a couple of the starters. I would probably recommend the former, unless you happen to be eating with a veggie! 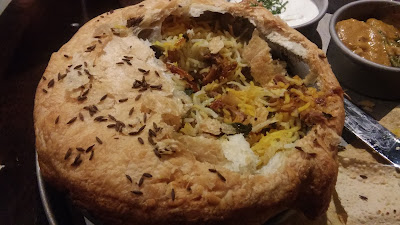 The biryani comes with a couple of poppadoms, some raita, a korma-esque curry and chili (with boiled egg if you get the meat version) and an absolutely delicious chutney. Overall, the biryani was a little too… aromatic for me. The flavour profiles weren’t quite suited to my taste. Sort of reminded me of  incense. However, that didn’t stop me eating as much as I could until I was stuffed. It was still tasty, although the rice got a little dry at times so I would suggest giving the whole thing a good stir so the meat juices can supply some moisture. Or maybe pour your curry into it. 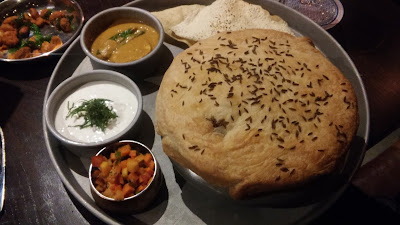 Anyway, we were way too stuffed for dessert and really enjoyed the whole meal - I would, and have, recommended it to others. Especially for those wings. Oh, those wings!

Posted by Ginglesnuff at 1:24 PM No comments: