Rudies…. A message to you Rudies…. And that message is: Nice one.

On a Monday I went down to sample a new jerk chicken joint in Dalston. Two days after my superb fried chicken meal at Chick ‘n’ Sours might have been overkill but I figured the two types of cuisine were different enough that I wouldn’t suffer chicken fatigue.

Just to make sure, we started with some fried calamari with a coriander and lime dip. Oh my. I would say these were the best calamari I have had. The batter was so light and crisp with the squid being a little chewy within, but not at all rubbery. The pop you got from the dip was incredibly moreish – this is a spicy one! Great start.

On Mondays they do 50% off the half jerk chicken, so who’s gonna order anything else? Jerk chicken it was. I am certain I can polish off half a chicken whenever I used to order from Nando’s but these ones must be more plump than others as I was struggling to finish it. Of course – we also had sweet potato fries and an avocado, mango and onion salad to contend with too.

The sweet potato fries were pretty good and the salad which was a little superfluous was fresh and sweet. The chicken came with a sauce of your choice and not only did papaya sound the nicest it was also the hottest. The chicken was nicely charred on the grill (although seemed to take so long to come out we actually thought they’d forgotten about us) and had solid jerk flavours. 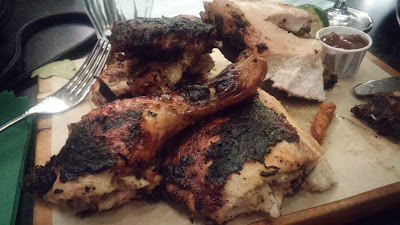 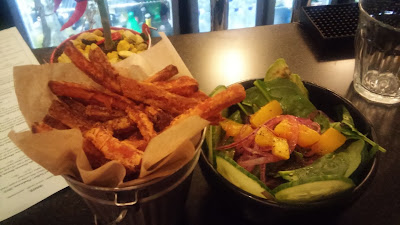 Of course, I couldn’t not try a cocktail. The Governor General which was rum orange curacao, vermouth and sorrel. A subtley Caribbean influence, though there was nothing subtle about the amount of alcohol in it. 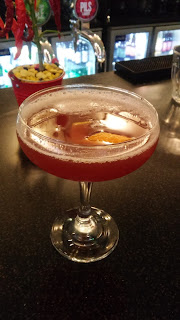 An all-round enjoyable meal out.

Posted by Ginglesnuff at 5:03 PM No comments:

Apparently there are people out there who do not spend their Saturday nights out on the town until about 6 am and, therefore, are able to get up and go a-brunching at a reasonable hour on a Sunday. But what if you are not a part of this odd demographic? What if you really, really want brunch (complete with Bloody Mary hair of the dog) but you also really, really do not want to get out of bed?

Well, in that case, let me present to you EatFirst. They are a meal delivery service and as of May, they have added brunch to their offering. Bingo. I was invited along to a recreation of what a home-delivery brunch could be like when they hosted a pop-up at The Little Yellow Door in collaboration with Brünch who are doing a guest Berlin-inspired brunch with them. 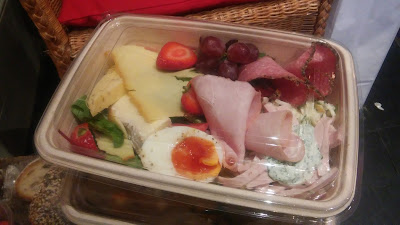 The food was amazing. All very fresh and healthy, with vibrant colours. Brünch seems to have handpicked some of my favourite foods and combined them to make them even better. The rosemary infused butternut squash and feta was probably my favourite but a surprise hit was the smoked mackerel pate with grated apple, horseradish and lemon juice. I normally find mackerel too fishy for my tastes but the additions cut right through that. I had several helpings! You can choose your dishes and they will arrive in prettily presented packaging for you to decant onto plates (this would also be perfect for brunching with guests if you can’t be bothered to cook) and you can even choose to have the ingredients for a bloody mary delivered! I was very impressed and have been telling all my fellow reprobate friends who can’t make it out of the house before 3pm to go to a restaurant. 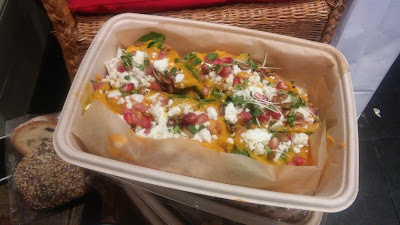 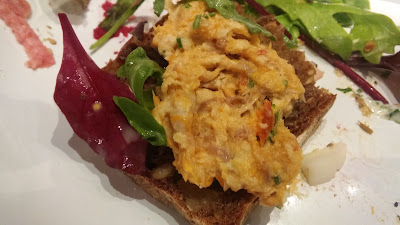 A more traditional brunch comprising things like Asparagus Frittata, Eggs with Italian etc is also available and they will have other guest chefs creating menus for them along the way. Genius! 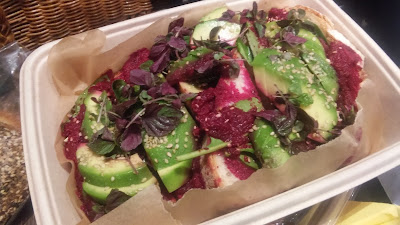 Posted by Ginglesnuff at 11:15 AM No comments:

It took me a while to get here, took me a while to try any of Carl Clarke’s food in fact but it was worth the wait. This place is chicken heaven and we loved everything. Except the fries. The fries were way too ordinary. But everything else was fabulous. Stephen and I shared a chicken burger between us (which is a monster of a burger) and a plate of the guest fry chicken – black bean and ginger, spring onion and pickled bamboo shoots, plus the aforementioned boring fries, and the charred hispi, kimchi salad cream and bacon salad. Plus a bit of bone marrow BBQ which was delicious but in some ways superfluous because the chicken was delicious enough on its own.

The ‘salad’ was a well needed bit of crunch and freshness to act as a counterpoint to all the fry going on elsewhere. It also packed a welcome poke!

The chicken was definitely the star of the show and we couldn’t help remarking to each other as we ate how much we were enjoying it. That burger! Firstly, it was a behemoth. One of the biggest burger specimens I’ve seen. And secondly, it was just delicious. Crunchy, spicy, well balanced in terms of meat to topping to bun. A joy. 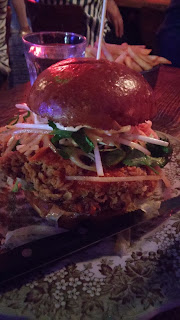 The plate of fried chicken we equally well received, with the Asian, slightly sweet flavours really complementing the juicy, crunchy chicken. I’m salivating just thinking about it now. I need to get more in my person as soon as possible. 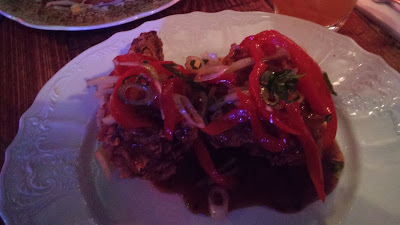 I then went out to Feeling Gloomy to dance to 'miserable' disco. I seemed to pick a bad night because the place was rather empty but the night itself was fun. Of course, the songs aren't all downbeat and miserable at all - the lyrics might be but the music is still danceable. They played The Smiths and The Cure, a bit of Kate Bush, and that was all good fun. Just a shame it wasn't busier.
Posted by Ginglesnuff at 10:10 PM No comments:

Mister Lasagna is one of those one-trick pony restaurants – specializing in… well, I think you can guess.

But the variety it has on offer for its trick is quite astounding. (Italians and purists, you may want to look away now…) There was pumpkin and blue cheese, chicken and chorizo, ‘breakfast’, spinach, artichoke, arrabbiata.. and that really is to name just a few.

You can have a half a slice, a Regular or a Tris – three halves, allowing you to try as many different types as possible for just under £8. I did this and let me tell you, three halves of Lasagne do not make a light meal. I actually had to leave some! I had the pesto, chicken and chorizo and carbonara/breakfast. Taste-wise, all three hit the spot, with the pesto version probably being my favourite. It is just a shame that they didn’t warm them up for quite long enough – they were nowhere near piping through which made them a bit stodgier I think than they would have been otherwise, and by the time I got near to finishing they were basically cold. 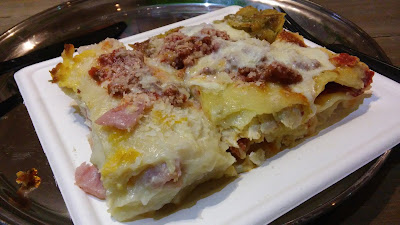 The place is definitely casual, meant for a quick dinner rather than a long and lingering meal. You pick your lasagna at the counter and it is served to you on a Styrofoam plate, which you take down to the restaurant bit. If you’ve ordered wine (they had a very pleasing red for £22), they’ll bring that to you. There is a range of table sizes – some twos, one large communal one a few in between which makes the place feel a bit like a rustic kitchen. We really enjoyed the real moss growing behind us.

I did say this isn’t the type of place to linger, but actually, we did just that and no one seemed to mind. Most others didn’t though, which meant table turnaround was quite swift, and we were the only ones left by 9:30 (we’d arrived at 7!).


I was far too stuffed to try any of the desserts on offer but I would happily give them a go. This is definitely somewhere I’ll bear in mind when I want something reasonably priced and satisfying.