I was invited to attend a gathering on Wednesday night of secret operatives in order to be introduced to the new agent in our midst - Agent Maiya. If that name means nothing to you then you've obviously missed the latest in the Compare the Meerkat advert storylines. For the whole night was a night to generate interest and promotion for Compare the Meerkat (*ahem* Market). But it wasn't some cheesy sales plug and there was (sadly) nary a sight of Sergei. No no, this was done in conjunction with Future Cinema, the partners of Secret Cinema, who also specialise in immersive cinema.

Now, I hadn't been to a Future Cinema event before so I can't extrapolate as to what all their events are like, but if they're even normally a fraction like this one then they are very fun indeed! It's ordinarily Secret Cinema where you don't get told what the movie is before you go, but for this event the film was a mystery. Which was probably apt for a secret spy-themed event. However, we knew it was a spy film from 1996 so we were pretty sure it was Mission Impossible. Not to draw out the suspense - it was.

We were told it was black tie, and although I felt a little weird getting glammed up at 6 pm on a Wednesday (and a little worried no one else would end up making the effort) once we got to the venue I was glad I had as everyone else had too; some were in full-on glitzy floor length gowns complete with long gloves.

Of course the other benefit of everyone adhering to the dress code is that it makes it harder to spot the actors from the attendees. So when one of the men in a suit suddenly bursts into a sprint it is a bit of a surprise. Sometimes, though, you can get a feel for who is a part of Future Cinema. When a shady character in big overcoat approached me and Stephen as we arrived, I knew it wasn't some East End weirdo. He advised me - without drawing attention of course - to drop my date should any trouble occur.

Little touches like this happened all throughout the leadup to the movie. Our names were checked off lists several times. The official reason for the event was 'the Ambassador's party'. As we entered I shook hands with the hostess who asked me how I knew the Ambassador. 'Distant cousins' I replied. 'Are you sure?' she asked me, fixing me with a stare and not letting go of my hand. 'Very distant' I answered and was finally let in, where, at the bottom of the stairs the Ambassador himself greeted us and welcomed us in, kissing my hand as you would expect an aristocrat to do. While we were seated the same guy from outside came by, reminding me to drop Stephen should the need arrive. Soon after a blond man accosted me - 'What did he say to you, that man?' he asked in a Russian accent. 'Nothing! Nothing at all', I lied. It made you feel part of the performance and get into the swing of things.

I should mention the venue - it was held at the Troxy, a venue I have wanted to go to for some time. Can't believe it wasn't actually on my List. The venue is absolutely stunning. Much bigger than I imagined. With tables and chairs and a couple of bars set up it was a most impressive setting. We really did feel like special guests at a swanky do.

I managed to go to the bathroom just when they did one of their set pieces before the movie started during which Ferrero Rocher (oh Ambassador you spoil us) were strewn around the floor. Luckily Stephen nabbed me one.

And then it was almost time for the movie to begin, but first we had an introduction from Miss Liz Hurley herself and a short speech from Agent Maiya telling us how female agents are the way to go in the Meerkat world. And then it was time for Mission Impossible. 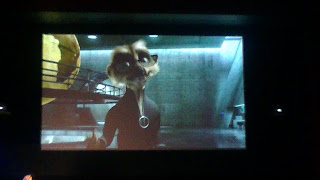 You might think that was where anything of note ended and you just settled in to watch the movie. Not so. Even throughout they would have people recreating scenes, such as people crawling through the tables, or they had rigged up 'explosions' to match the explosions on film. So even though you had likely seen the movie already, there were plenty of surprises to keep you interested. The best by far was the recreation of the famous download of the NOC list where Tom Cruise is suspended in the 'impenetrable' atrium. They meticulously copied the whole thing in front of the screen on stage. 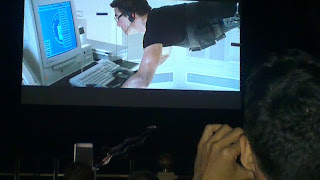 It was definitely a good thing if you had seen the movie before because most of the audience clearly weren't interested in paying attention to it and talked through the whole thing, making it rather difficult to hear. I knew the movie very well, but my boyfriend had only seen it once before so I kept having to tell him what was going on.

I really enjoyed it and it made me wonder what a Future Cinema event that wasn't a special PR event would be like. I am now regretting that I can't make the next one - they're giving Dirty Dancing the Future Cinema treatment and that is one of my favourite movies! 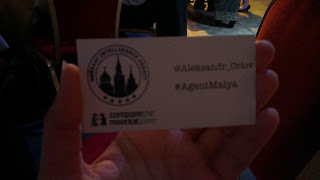 So, thank you Agent Maiya and good luck with your mission.
Posted by Ginglesnuff at 8:34 PM

Email ThisBlogThis!Share to TwitterShare to FacebookShare to Pinterest
Labels: Compare the meerkat, Future Cinema, The Troxy, things to do