I want to just say this - I had heard about BBQ Whisky Beer waaaaay before it went and won Ribstock 2013, I just hadn't got around to going. Of course when it was crowned champion I wasted no time in getting there, a little worried that the rest of London would have the same idea. But, on a Monday the place was not at all full and even though our booking was for 7:30, we ended up sitting at our table a little earlier than planned.

The Wargrave, by the way, is a pretty nice pub. We sat outside for a bit which obviously doesn't give you much of a feel for a place,  but inside it has a proper pub ambiance but with nice touches like stained glass lampshades and some sort of distillery machinery in the corner. The whole place is full of nods to its illustrious whisky collection. 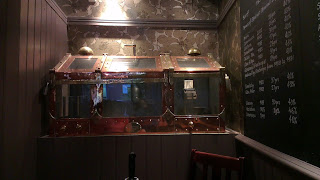 But enough of that, we were there for the 'cue, the smells of which, and the smoke of which, was wafting all over us as we sat looking at the menu. Of course, we all pretty much went for ribs, and I couldn't go there without trying the beef one which had conquered Ribstock.

It was most definitely a competition-winning rib. And, even though I didn't make it to Ribstock this year, I've tried a few now. The smokey flavour was deeply present and evident in the pinkish hue throughout the rib. The meat was tender but still had a bit of chew to it and there were plenty of slightly charred bits to remind you that it was BBQ. The rib was glazed with a sticky, almost tarry, slightly sweet BBQ sauce that, I have to say, reminded me quite a bit of the one my Dad makes, which is a pretty high compliment.


Stephen got the pork ribs and I was allowed a little bite. They were fantastic too! Again, smokey flavour through it, ridiculously tender meat easily removed from the bone. One mouthful really wasn't enough. And I really liked the accoutrements of colelslaw, pickled carrots and pickles. I had a little ketchup with my chips but certainly no sauce was necessary on the main event - the meat.


One odd-bod had a burger - the one that came with short rib beef on it, and required a firm hand to squish it down from its stacked height and make it edible. It looked amazing and my friend seemed pretty pleased with it. 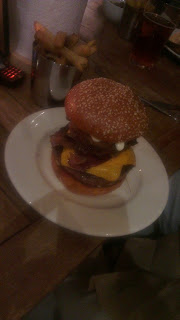 The portions at BBQ Whisky Beer are pretty immense, although everyone did say that they thought my jacob's ladder out of the three we'd ordered was a little smaller in comparison. I'm not sure if they were just saying that to make me feel better about finishing mine with more ease than the two boys that had also ordered the rib, but I confess I did feel I got a 'ladies' portion. Don't get me wrong though, there was still plenty of meat to contend with, meaning I didn't feel as reluctant as normal giving some to my boyfriend to taste. It defeated one of the other boys and he had to dole out what he couldn't manage to finish among the rest of the table.

The baked beans were a bit posh for a place like this - they were a mixture of bean in a thin spicy sauce, rather than what I think of as baked beans - baked beans should be at least a little claggy. And... I wouldn't have minded some meat in them beans! Can never have enough meat.

The chips, sorry, triple cooked chips, were fantastic. For once, I'd be happy to say the triple cooking actually had a noticeable improvement on the chip. I am kinda sad I 'shared' them with my boyfriend. While I was still toiling with my beef rib, before I knew it, all the chips were gone. 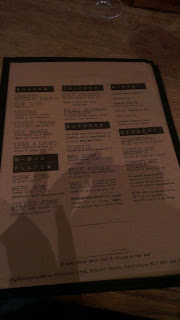 I think I probably could have fit more in and am a teensy disappointed that we just had the mains and didn't try to fit in a starter or force down a dessert, but with one eye on my waist and another on my wallet (I am out every evening this week, which does neither any good), I didn't protest too much that we weren't making the most of our trip. BBQWB is in a bit of an odd location, but with food that good a return visit is a guarantee so I'm sure I will have the chance to try the rest of the menu. And some whiskey which we also didn't manage!

Most of us at the table have been to Red Dog, Pitt Cue Co and Duke's and there wasn't much debate about it - this was clearly a front runner. They all have their merits - Red Dog is buzzy and more affordable; no one can beat that bone marrow mash at Pitt Cue; and Duke's had great smoky flavour. But they all have their downfalls too - Red Dog has a less obvious BBQ taste, Pitt Cue has no booking, Duke's meat wasn't as melt-in-the-mouth. And yes, even BBQWB has some down sides - it is a little pricier than the others, and it's in kind of a 'meh' part of town. However, it manages to merge amazing texture with an intrinsic BBQ flavour in its ribs similarly to the way Pitt Cue does, but you get more AND you can book! What's that phrase now? Oh yeah -  #Winning!