I don’t know why I was so taken aback by the amount of gin the London GIN Club had but it was a little overwhelming – how was I to choose? So many gins. ALL the gins. To be mixed with Fever Tree tonic (natch) and interesting little garnishes – like plum, or tomato and coriander and served in those gorgeous copa glasses that are like fish bowls. They were all priced at £8.95 unless otherwise stated, and actually there were probably more that were ‘otherwise stated’ than weren’t, and they were generally all about £9.50. So I chose the way any sensible lush would – by ABV. 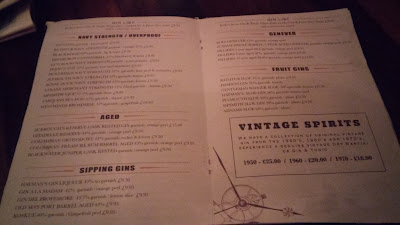 The first one I tried I thought had a bit of a peppery taste to it but what do I know, and my friend was directed to the sloe gins they had on offer when she said she liked it sweet and fruity. The Bathtub sloe was perfect for this – tasted like fruit punch when mixed with tonic. 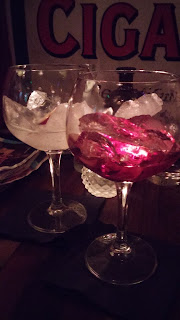 For her next she had one from the Citrus section but this was too much serious gin for her – not fruity enough. You get a bottle of fever tree to split between you and before I knew it she had emptied pretty much the whole thing into her copa. As much as I could, I did not fancy drinking just straight gin so we asked for another and our request was graciously granted. 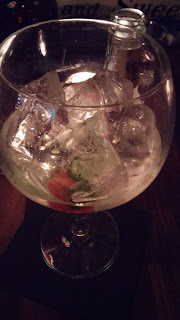 I have to say, I thought the service was lovely - not overly present but they kept an eye on you and menus were swiftly handed over when our first drink was finished. And they seemed more than happy to chat through the different types of gin they had on offer. Although one of the servers didn’t know that Martin Miller was a partly Icelandic gin – tsk tsk. (This I only knew from the Gin Off at Graphic – excellent!) 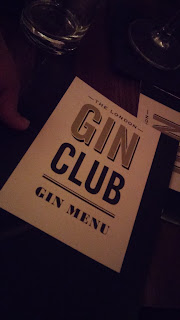