Death by Burrito at Hoxton Bar and Kitchen, 3rd July

Having been to Death by Burrito when they were a pop-up at Catch, I was excited that they had a permanent place at Hoxton Bar and Kitchen (one of my ‘go-to’ bars when I’m in the area). My thinking was that, as with Rita’s, it would give them space and time to get creative and put some new items on the menu that would really show the breadth of what they could do. I was pleased to be invited for a sneak peek the day before they opened up officially. I imagined a sit down event with a selection of everything on the menu for everyone to try and maybe with some explanation of it all as well.

It turns out the night wasn’t quite like that. It was more of a party than a food event. Ryan Chetiyawardana (otherwise known as Mr Lyan of White Lyan which I have yet to get to) was responsible for the cocktail menu and the three I tried were all delicious, and strong, so no complaints there. But you start serving cocktails, and free cocktails at that, and the bar becomes a blockade very, very quickly. They probably should have just whipped up batches of one cocktail and lined them up on the bar for you to take as you pleased – let’s be honest, when something is free, people aren’t that picky about what it is.


I ended up talking to one of the bloggers from InformedLondon and his friend, and one of the BarChick girls, who, like me, were there to see what the menu was all about. We came hungry and we wanted burritos! And we stayed that way for quite a while as food didn’t start coming out until past 9pm. Finally, it arrived to a chorus of grumbling stomachs – a basket of chicken wings to share and a slider each. Not quite as Mexican as I was expecting. We waited for more, or, specifically – some burritos. But – can you believe this? – no burritos were to be found! What was even more bizarre was that the food we did get wasn’t even very good. If you’d never had DBB before, I don't think this offering would persuade you to come back to try the main event, unless of course once you had a hankering for burritos you couldn’t rest until you’d been back to get some. 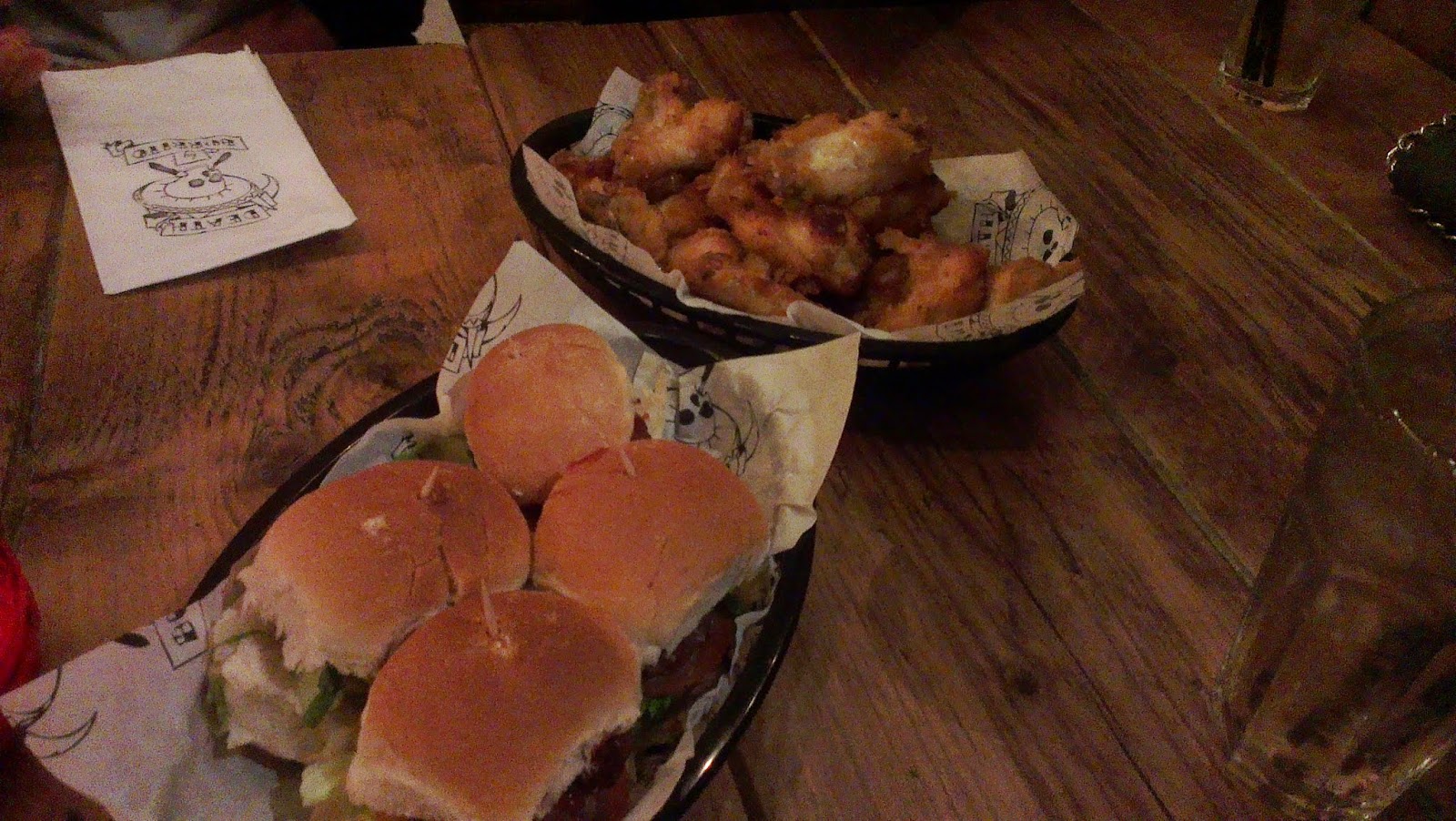 The chicken wings were alright – the agave gave them a sweet taste that I liked but they weren't as good as wings I’ve had elsewhere. Then we tried the sliders. Now, I know I’m not a burger fan but even I could tell these were not the way to do burgers. They were cold by the time we ate them, and had dried out (though there were signs they were cooked well originally, being slightly pink in the middle), and there was far, far too much bread. Assuming these were the candied bacon and jalapeno burgers on the menu, I didn’t realize any bacon was involved until looking at the menu afterwards, and the jalapeno might as well not have been there for all the kick it gave it. The mini-tacos were okay – the meat in particular was lovely; a slightly sweet, smoky flavour and a barbecued texture to it, and I liked the crunch of the radish on top, but they too were a little dry. I applied hot sauce liberally.

But don’t be too disheartened. I spied on the menu the items I’d had before, so if you wanted to know what their burritos are all about, which is where their strengths lie, read my previous post on them. 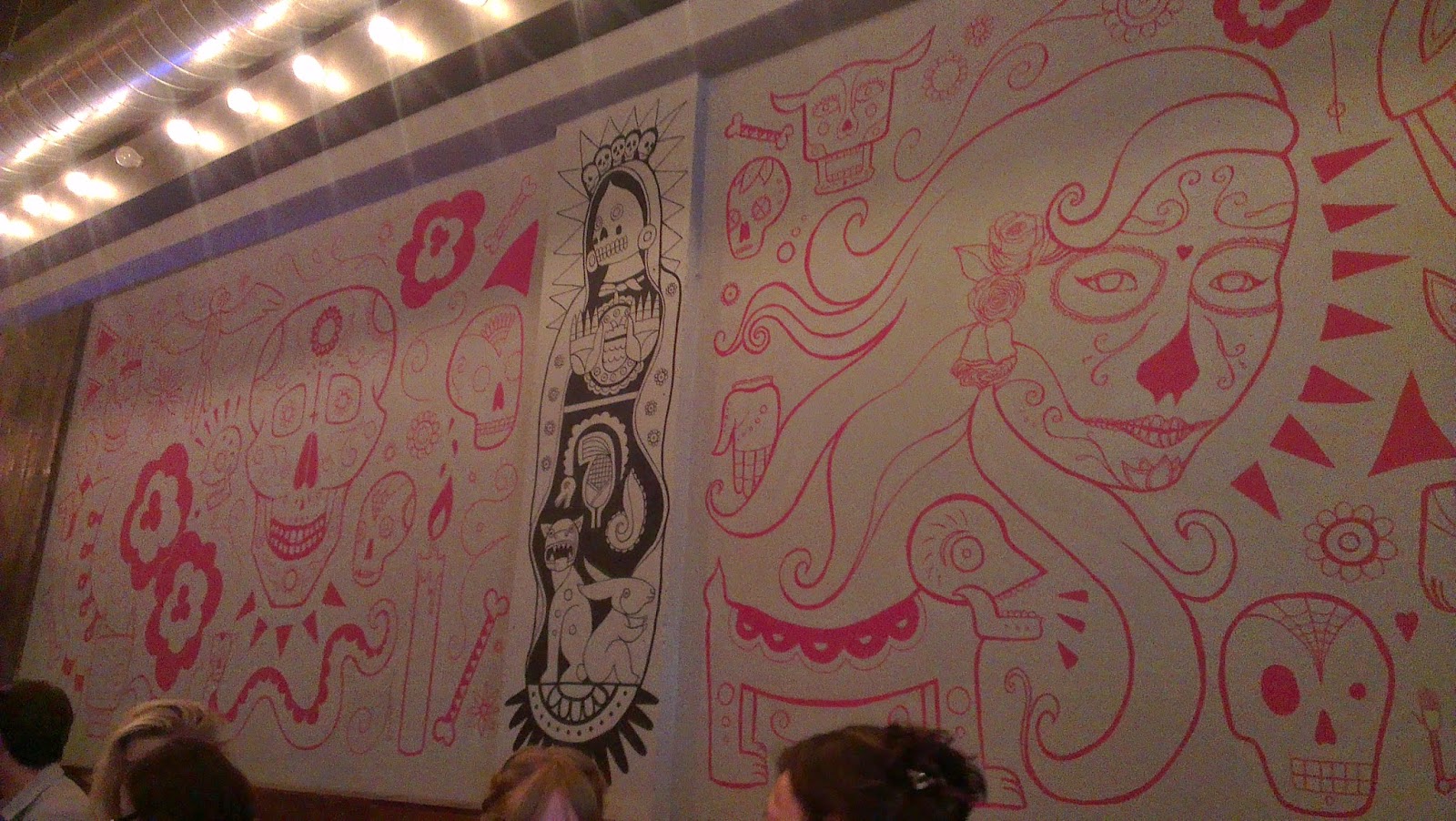 Because this was also to launch of their cook book there were a few copies on sale and I had a browse through it. Some pretty tasty-looking food in there, but I don’t cook so it was pointless me getting a copy. Several people did though, and there was a flurry of transactions which seemed to double as a signal for half the party to clear off! Which was a shame because the DJ they had was banging and if it had been a Friday I’d have merrily sipped a few more cocktails soaking in the tunes. The place has been done up all Mexi-macabre and looks the business so it’s a pretty cool place to hang out. And those cocktails are certainly worth a visit. 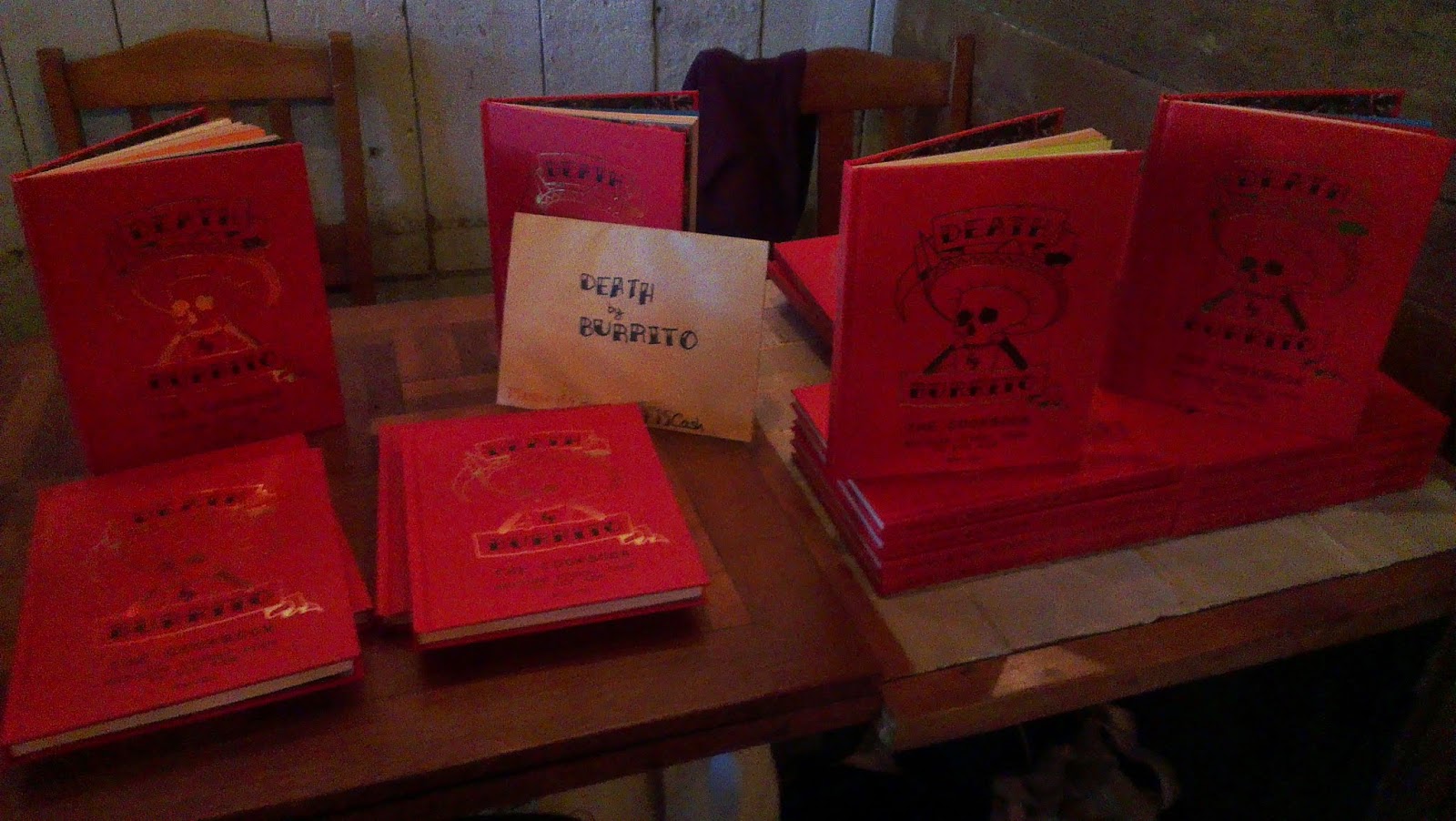 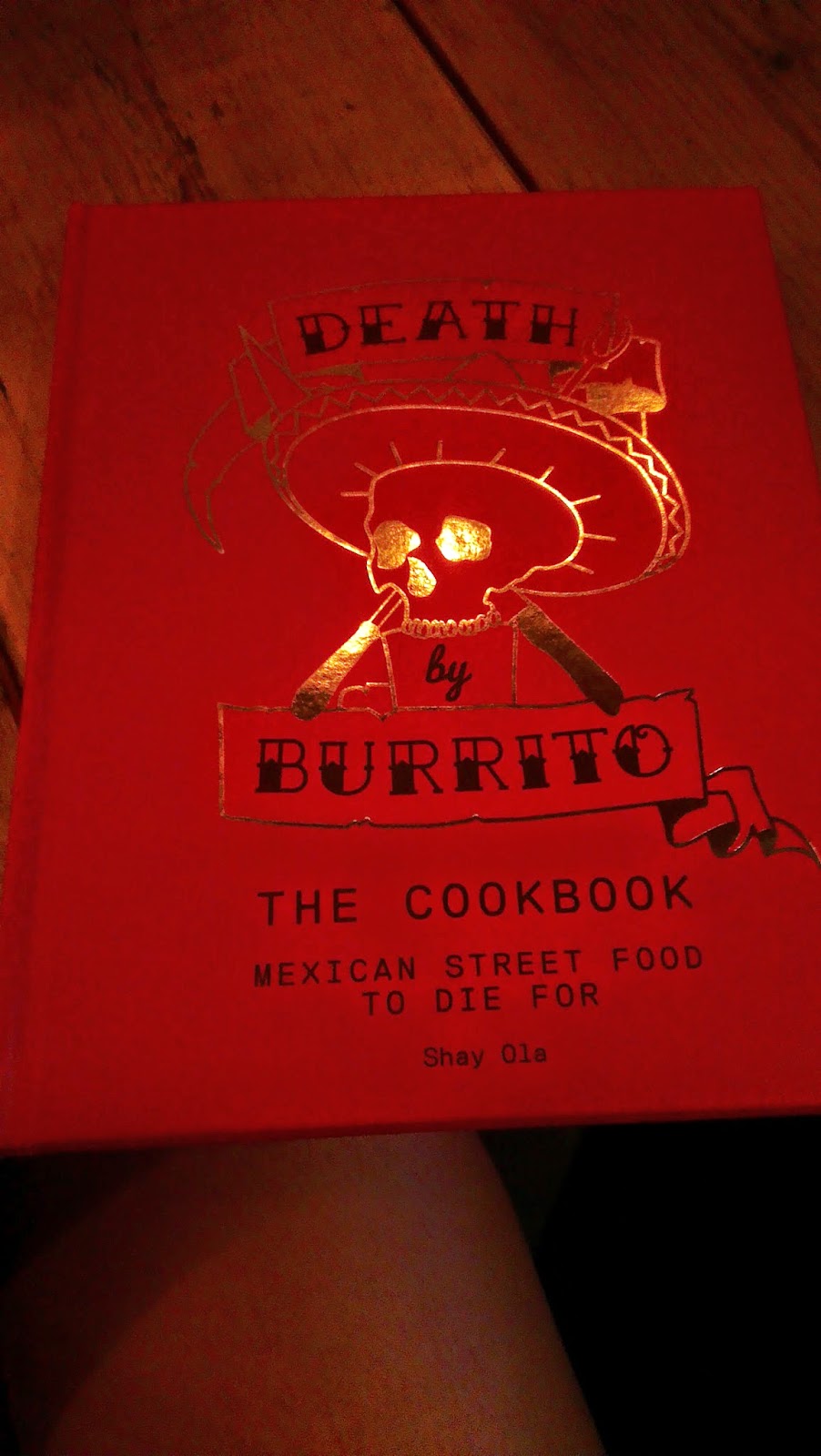 They didn’t have the slushie machine for slushie negronis, and they couldn’t make the most interesting-sounding drink on the list – the Sweet Papel with sweetcorn and coriander atomisation. But I tried the Pineapple and Cacao Smash, the Bandito Hi-Ball and the Ring-a-Ting-Ting. All were very easy to drink, easy on the mixer and strong on the liquor. I worried that the Bandito, being in a high-ball glass would be mostly ginger ale, but I needn’t have: slug after slug of tequila went into the cocktail shaker, and the ginger ale was only a quick gesture to sweeten things up at the end. My favourite though was definitely the Ring-a-ting-ting – not too sugary with a cucumber background aroma making it super-refreshing. I would have stuck to these but for the blogger in me wanting variety. 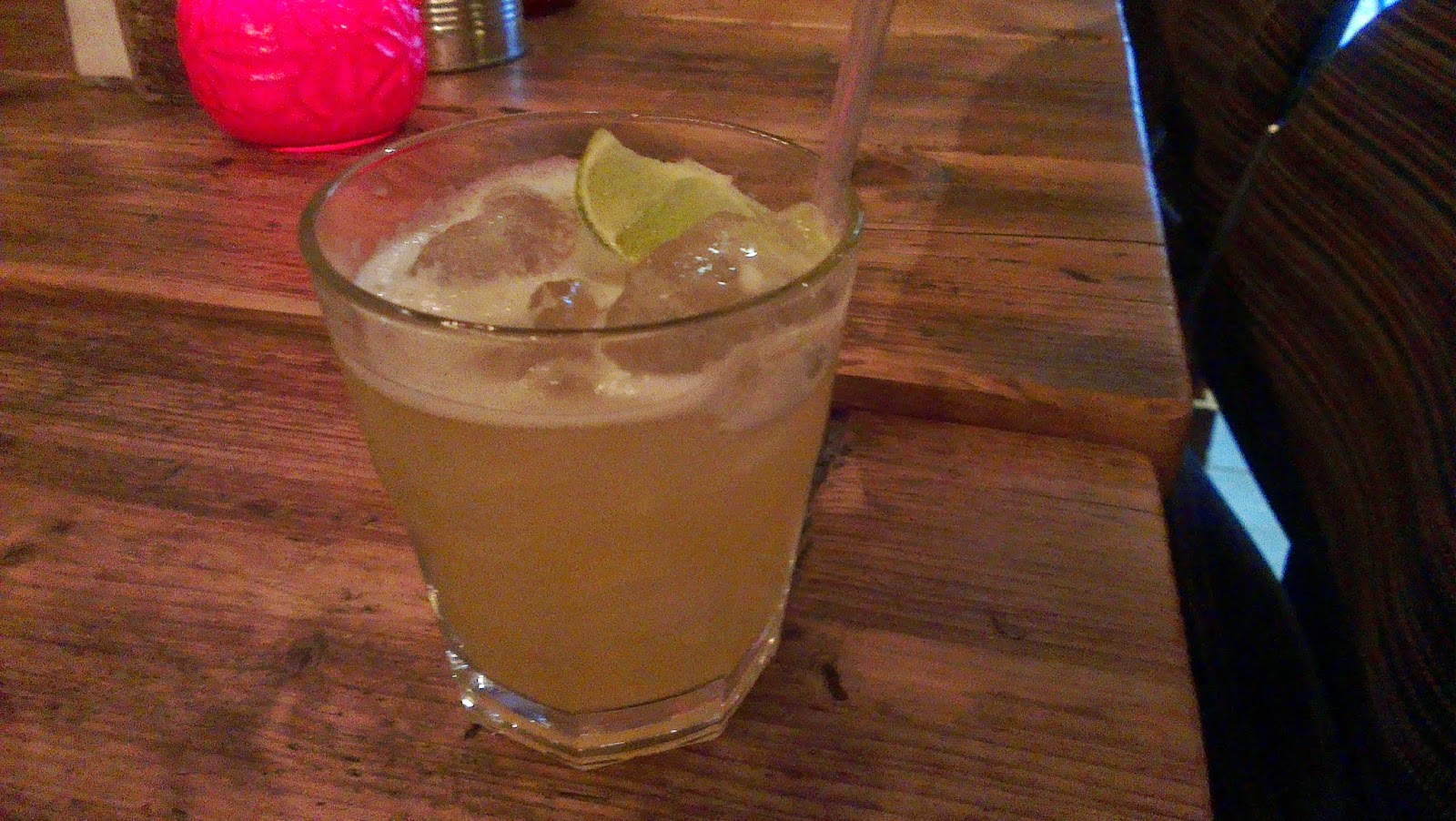 So, not sure what to make of this place. If you’ve been, let me know what you thought!
Posted by Ginglesnuff at 1:05 PM