Smoke n Roll have quite the prosaic name for themselves. They smoke meats, and then they serve them in a roll! And right now they're doing it at The Black Heart in Camden, where we went to check them out last week.

There are a lot of places doing BBQ right now, but for me, as long as it's good, my appetite does but wax for smoked meats, ribs and sticky wings.

First - the rolls. You can either get pork or beef, and I expected something similar to what we had at The Joint - buns of pulled pork and shredded brisket. Not so. The meat here is bucking the trend by coming in thick slices, rather than shreds. And it was nice to have something a bit different for a change. The pork had a really good, smoky taste to it, although my first bite was mostly gristle, so not a great start. However, I got over that and enjoyed this sandwich a lot. 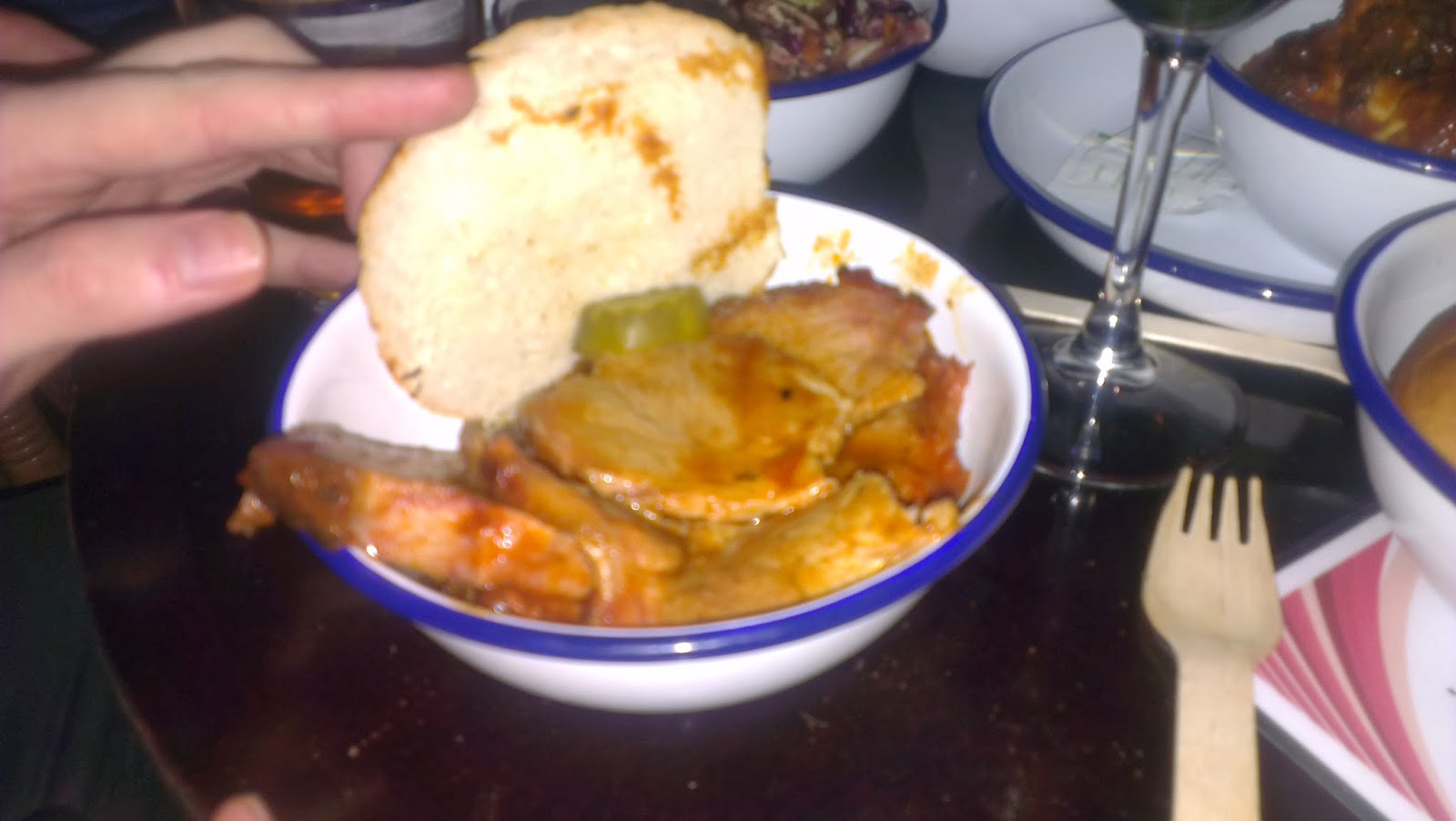 I was especially pleased that the brisket came in slices as that's my preferred method of serving. I remember being disappointed when I first went to Pitt Cue's trailer and instead of slices of melting, smokey brisket, a la Fette Sau in Brooklyn, I had a carton of the pulled stuff. Here they've done a pretty good job, and the pickles with it were welcome, but I have to say that if you want slices of smoked brisket, then Texas Joe's pulled this off better (though I wasn't a fan of the rest of their menu). 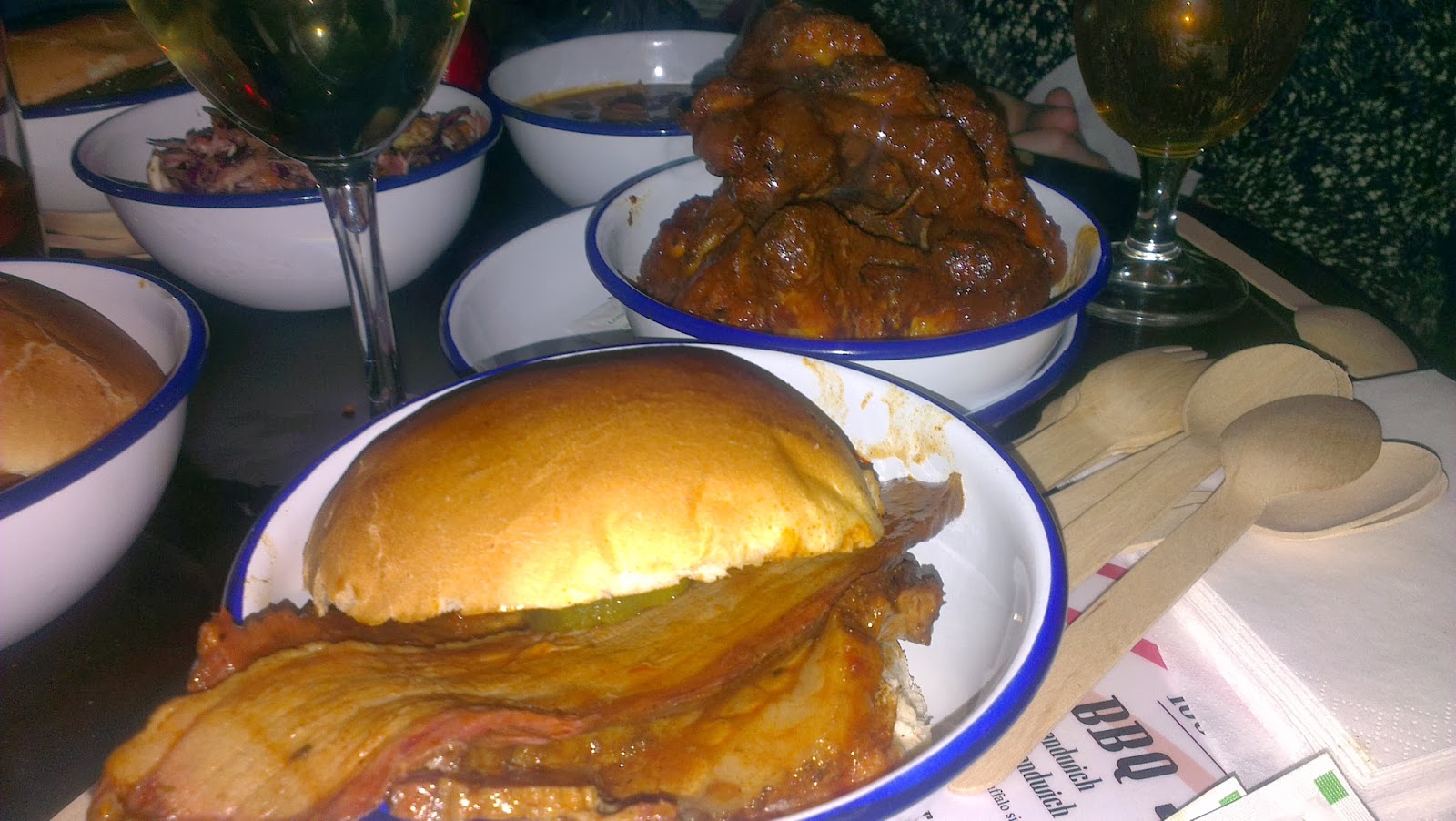 There was a big group of us, and the menu is short so we ended up ordering everything on there and sharing it out between us. We had one portion of ribs, and enough wings for everyone to have two. The ribs were pretty bad. They were tough and chewy and this was so overwhelming I can't even remember the taste. It seemed so pointless to have them on the menu if they weren't going to cook them until they fell off the bone.

Chicken wings had a great tangy flavour (I dipped my chips in their sauce instead of the BBQ sauce we were given) but by the time I got round to having mine, they were pretty cold. So I imagine they'd be even nicer piping hot. However, I do wish they'd been separated into their separate halves instead of being served whole and having to be cut apart (I'm squeamish about pulling bones apart).

The grande surprise was the fact that we all loved the sides so much. I mean, who really cares that much about sides normally? Well - these guys. Their baked beans (with carrot!) were some of the nicest I've had, if not the nicest - just the kind of texture I like in a bean, not too 'al dente'. The carrots? Yeah, they worked.

And the coleslaw was really, really good. It's a light touch coleslaw, not the claggy mess many a place gives you. It had a distinct taste to it I couldn't quite put my finger on. Kimchee? It reminded me of the crunchy salad that rainbo do. 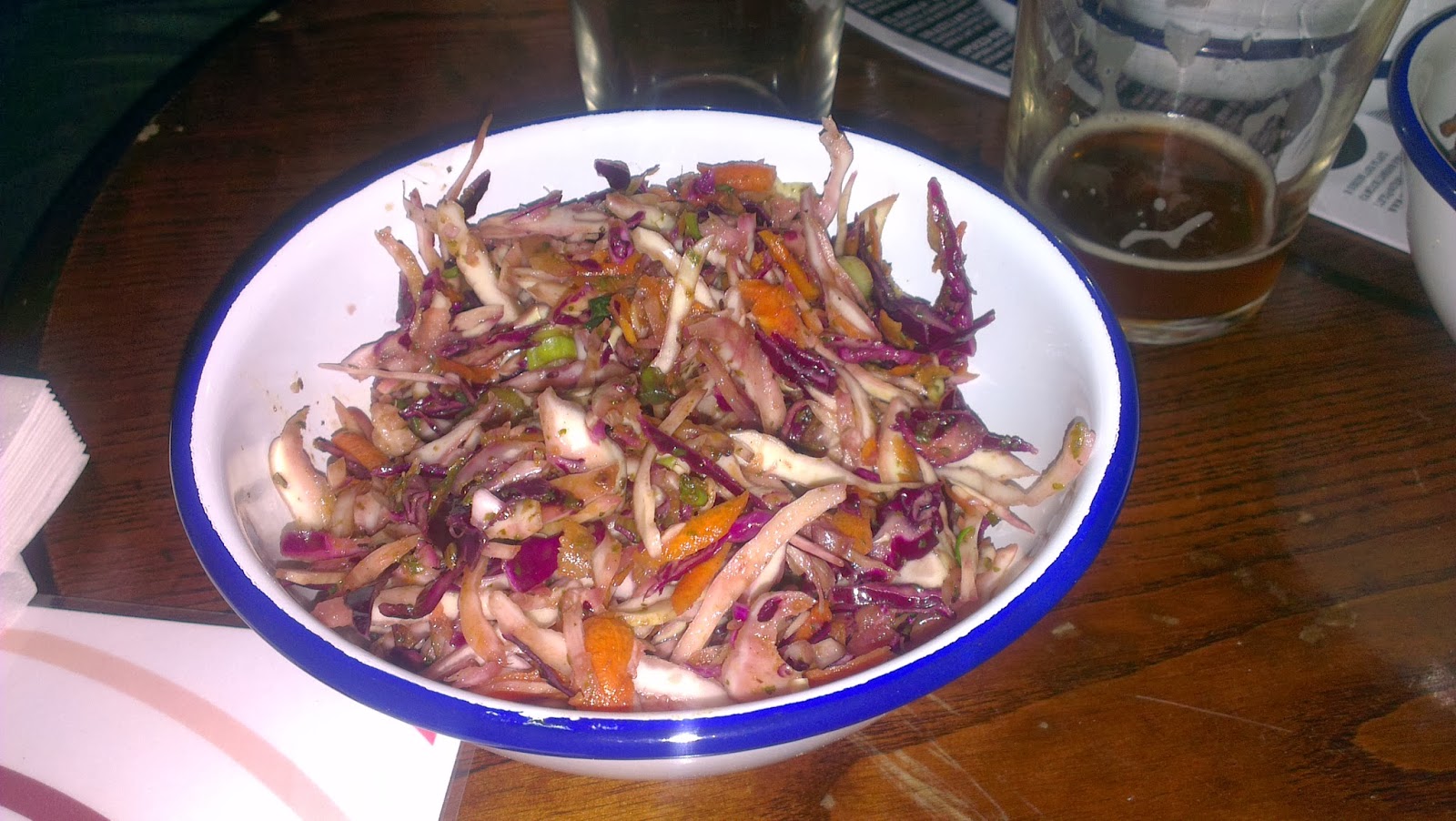 And the chips... actually I didn't love the chips but the others seemed to like their fuzzily-seasoned coating. They did go rather well with the cheesy dip we were given.

Smoke n Roll are making a decent stab at joining the BBQ scene and have managed to do some things differently enough to make them stand out from the crowd, but just don't quite have the wow factor that would entice me back.

This was all in the setting of the rowdy, rockin' Black Heart which was, unexpectedly, pretty busy on a Friday night. This place is rock kitsch, with weird Mexicanesque shrines everywhere, and rock music playing loudly. They do gigs upstairs. The Smoke and Roll dude food totally suited the place. Unfortunately, we probably would have had to be doing tequila slammers in there to have the motivation and enthusiasm needed to compete with the music in order to have a conversation, so after our food we scarpered to the more refined Craft Beer Co round the corner. Still, I liked the chutzpah of the place, and can imagine if I was 'on one' this would be a fun place to return to.