I've been getting in to my chicken lately. Well, yeah, I know everyone has, but actually I've been slightly bucking the trend by giving my money to a knock-off Nando's down the road from me (called Roosters, if you're interested - great potato wedges) rather than the host of new rotisserie and 'posh' fried chicken places that London is so recently strewn with. Not that I don't plan on getting to those places eventually. But the one place that really caught my eye lately (after having been to Clockjack Oven a while ago) for some reason was Whyte & Brown. They're very dedicated to the chicken, but also show a lot of appreciation to the egg. And, while this place is sort of a one-note restaurant, focusing on just chicken and eggs as it does, they are showing a lot of inventiveness in the ways they serve this. Trying to decide which chicken or egg dish to go for was not an easy task. 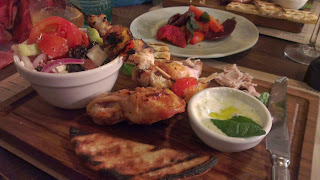 In the end it was a close call for me between the chicken souvlaki and the ham hock, chicken and leek pie but I fancied something a little lighter so the souvlaki won out. This was a marinated kebab of breast meat with grilled peppers and onions, with two slow cooked chicken thighs, a pita bread, tzatziki dip and feta salad on the side!

To whet our appetites we shared a starter of chicken croquettes and to feel extra healthy we ordered the roasted root vegetables as a side.

The chicken croquettes were filled with chicken, pancetta and bechamel sauce and came with a slightly smoky salsa which had a really deep tomatoey flavour. The bechamel ensured that the croquettes were not at all dry - the quite reasonably sized bits of pancetta were a nice touch. Chicken nuggets all grown up. So far so good. 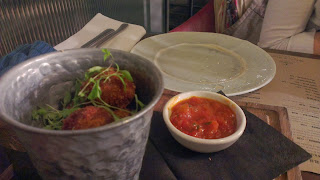 The root vegetables came out first - a mixture of beets, peppers and squash. These tasted nice, and looked very pretty but some of them were slightly undercooked. They were a bit of a disappointment and the low point of the meal. 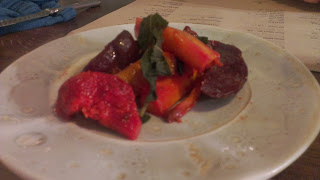 I enjoyed the chicken kebab while I ate it although it was forgettable compared to the slow cooked, moist and succulent thigh, with crispy skin, of which I was so pleased we had two. The feta salad was light and refreshing, and the pitta and tzatziki brought the whole thing together. Pittas were toasted on the outside, fluffy inside and perfect for scooping up the last bits of salad with some dip. It's no grand feat in gastronomy, but it was a very pleasant meal. 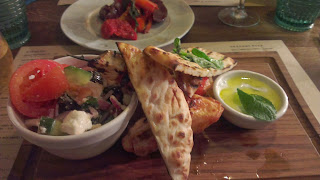 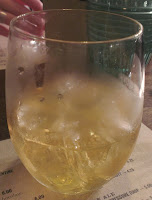 After our aperitifs of prosecco, we had a cocktail each with our dinner. Alison's was a white wine spritzer with a twist - rhubarb bitters. Mine was a Japanese Mac- japanese whiskey with plum sake. Sweet. Strong. Amazing. It took a lot of willpower to make that last my whole meal! And even better, they were only £7 and £8 respectively.

Posted by Ginglesnuff at 7:58 PM