Well, Alaween, from ALAN (Awareness and Love All-Nighters) turned out to be a drum n bass haven, which wasn't exactly what I was expecting (and in mine and my friends' humble opinions seemed a bit of a waste of so many different rooms) but I still had a pretty wicked time there. 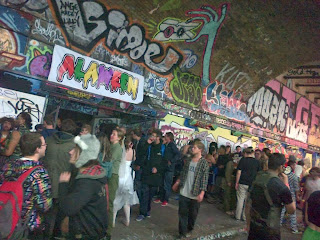 The theme for the night (hard to tell from this picture) was zombies vs commandos, although some people had cross-dressed as both. It took place in The Vaults at Waterloo, an amazing underground warren of rooms, just out the back of Waterloo.  Each of the eight rooms had a different DJ, except for one room which was the 'surgical lab' - where you could make an appointment if you were brave enough...

In the surgical lab bunker, something was afoot. While it claimed that you would be treated and improved by walking through the plastic door, you couldn't help but wonder what might actually befall you as you passed through. Our suspicions were acutely aroused by the fact zombies kept trying to escape from behind the curtain. Yes, something back there wasn't quite right... 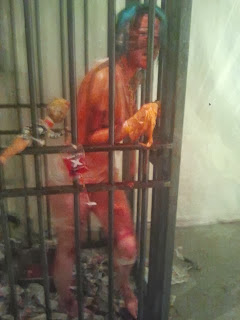 About ten minutes after making an appointment, my friend was directed into a wheelchair and told she could bring some family members along (all 5 of us went with her). We were accosted by a slightly undead looking guard but were let through, where my friend was put on the table and assessed - given some dubious liquid (Sprite!) and 'injected'. All the while, we were lined up against the wall trying to avoid our nurse's 'sister', a gruesome creature lurking in a cage and occasionally making a grab for one of us. She had some Haribo sweets to keep her calm but we riled her by nicking and eating them. After the assessment, we went into the recovery room where we were encouraged to have a lie down and relax. And then we left. Oh wait, no we didn't. We were then attacked by the gruesome beast who had somehow escaped her cage in the next room! Bits of disgusting jelly sweets and saliva went everywhere as my friend tousled with the gore-soaked zombie on the ground and tried to escape. While not exactly terrifying, it did give us a bit of a fright, as well as the resultant rush of hilarity afterwards.

For the rest of the evening we spent it exploring and dancing. The place was huge. Too huge I think, for the number of people. Even though there were 2,000 attendants, the number of people in each arch ended up being quite small, which meant some of them lacked a bit of atmosphere. We spent most of our time in the main bit although flitted into the Imaginarium area from time to time, just because we'd liked their last party so much.

Upstairs there was a bit of a chillout room where you could buy snacks (and brains) or take a relaxing lie down on the animal rug, or even the coffin they had provided. My friend and I spent far too long in that doing an extended photoshoot (no I'm not showing you the pictures).

We rounded off the evening in the main part again, once we had determined that yes, every single room seemed to be playing drum n bass, even though a whole range of music had been promised. The main room did seem to vary the most - they played some house and had an MC live in there at one point as well, but kept reverting to what seemed to be the one true love of most people there - dropping bass-heavy drum n bass. I had a good old freak out to it for a bit but with only an hour to go, we had grown weary of the music selection and decided to head home.

I enjoyed the little quirky touches, like the coffin, or the dead man hanging from the stairs, and the medical lab of course. They had some nice visuals going on in places - a few movies projected onto the wall. And I enjoyed the music sporadically. But it wasn't my most favouritest of nights recently. Not sure if I will seek out another ALAN event (famous last words - I'll probably end up at one for New Year's Eve!)
Posted by Ginglesnuff at 5:10 PM