It's Your Funeral, 12th September

It's Your Funeral was an absolute riot, I left with a huge smile on my face and one of the friends I was with said she had been smiling throughout. I am surprised that it wasn't standing room only, but if the quality is always that good I am sure they will soon be selling out each show.

The idea is that you have gathered to mourn someone's passing - in this case, it was Jack the Ripper. But we're mourning in style - a sort of New Orleans dixie jazz music style with plenty of laughs and spectacles thrown in. It's got everything - storytellers, dancers, singers, comedy. It's one hell of a wake.

The evening starts with the funeral procession, complete with brass band who provide backing music throughout the evening and play songs to take you into and out of the interval.

Then the compere, Bang Crosby took to the stage and introduced the acts, many (but not all) of which are themed around Jack the Ripper. The first act was in fact a mime - the Ungewinster. I don't think I've really ever watched mime before - it didn't really appeal - but this guy did a superb job. In all black and white stripes, with a manic smile he was quite a grotesque character whose movements on stage to dark music reminded me of body-popping more than traditional mime. It was a pleasant surprise. 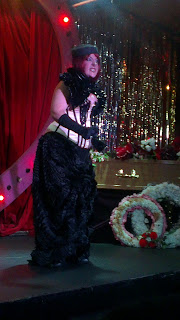 Next up we had Miss Carmen Mon Oxide who performed an operatic aria mourning her deceased husband who sounded quite the philandering scoundrel. She had a fantastic voice as well as being a good performer.

We then had a slightly odd interlude which was an homage to George Formby - a window washer came out and 'washed' some windows. He clearly had emotional problems though as he ended up drinking all his window cleaner. We were left wondering what to make of this and whether he'd be coming back later to do a follow up. He didn't, which was quite amusing in itself.

Next on stage was what can best be described as a 'silent movie' live brought to us by the Little Shop of Horrors who hammed up to great effect Jack the Ripper going home with one of his victims and trying to kill her, complete with a chase scene, a gruesome 'disembowelling' (sausages being pulled out of her stomach) and a big reveal that good old Jack was actually a woman! Yep, you even got to see some tits. 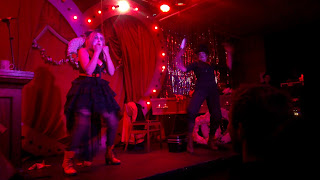 Just before the interval we had Tom Baker - a consummate raconteur tell us the story of Mad Carew (The Green Eye of the Little Yellow God) accompanied by an accomplished 'saw musician'. I've been to a few storytelling events in my time now but this guy was at the top of the game. It was more like an acting performance than merely telling a story such was his presence on stage and command of the audience. The saw musician had a perfect sense of timing, providing an enhancing and amusing soundtrack. It is hard to pick one stand-out act of the night but this was definitely a contender. 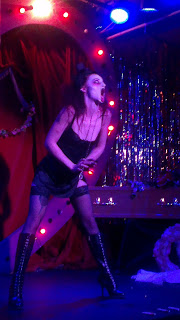 After the intermission we were treated to four more acts, starting with Snake Fervor, a woman whose speciality seemed to be inflicting pain unto herself. This was the sort of act you watched peeking through your fingers - not quite wanting to see but unable not to watch out of morbig fascination. First she stubbed a cigarette out on her tongue, then she put hooks through her upper and lower lips and swung a heavy bag from them around and around. Then she stood, nay stomped on a load of broken glass. You could see traces of blood on her legs afterwards. Macabre indeed.

Jaz Delorean, lead singer of Tankus the Henge (who I haven't yet seen) came on and performed I put a Spell on You with his accordion. His voice was so gravelly and raspy, listening to him really made me want a drink. Then he sang a song of heartbreak about losing his ex to a Gypsy King which was quite rousing.

A creepy and beautiful solo dance followed this up as Mary Beth Morossa tapped to the voice of someone reciting the story of Edward and Virginia (I think?), as they tango in the lamplight while he kills her. It's a little hard to describe how Mary Beth danced along to the voiceover to create a compelling act but it was wonderful to watch.

To round things off we had the Fabulous Bakewell Boys who I was already familiar with from Lucha Britannia Mexican wrestling. I didn't know what sort of thing they would do when they were moonlighting from wrestling but it turned out they did comedy and they were pretty damn funny! Their 'act' is to be slightly dim northern lads but they do this in an endearing and not overly offensive way - it's just a load of silliness on stage really. 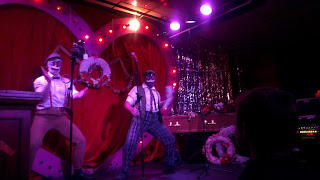 The whole night reminded me of old-fashioned vaudeville variety shows, except with a modern, macabre twist. Honestly, I can't rave about it enough. 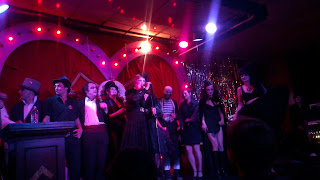 Posted by Ginglesnuff at 2:57 PM