The Miller Pub, 16th May

The Miller pub is the new pub from the people behind the Sebright Arms only this time they've transported their laid-back casual hipsterness slightly south of the river to London Bridge. 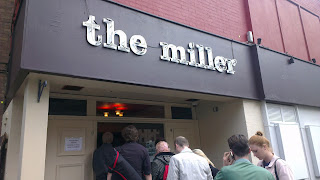 They officially opened on the 17th but I was quick enough off the mark to RSVP to their launch party, which was a night of awesomeness.

Their flyer promised a drink on the house and food from the ever wonderful Street Kitchen who are to have a residency there much like Lucky Chip have at the Sebright. Street Kitchen have been busy creating some special hot dogs for the Miller.

The flyer belied their generosity. When we arrived at the door we were given four tokens - three orange and one black. Each orange token was for a free drink and the black one was for a sample of the food. 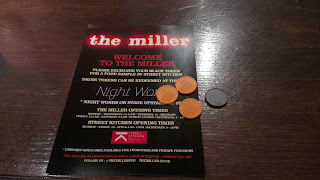 I had expected one free drink and to pay for the food so I was already well chuffed with these arrangements. I became even more pleased when I went and got my first drink and, as a non-beer drinker, saw that they had four different ciders on tap (in additon to those overly sweet Bulmers that are nice to have one of, but soon become too sickly) and also a perry! They were quite happy for you to have a taste first so I had a bit of the perry and opted for that. 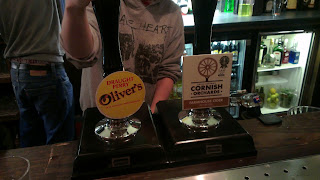 For ale and craft beer lovers they also had quite a selection, and I noticed someone with a bottle of 'Doggie Style' pale ale later in the evening which made me smile. 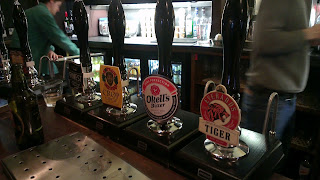 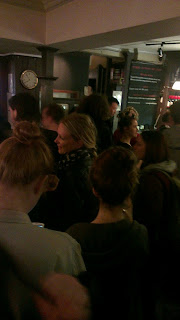 Then, when it came to the food, the 'sample' was a whole hot dog plus chicken wing on the side. Amazing! Of course, all this free stuff had to have some drawback but in this case I found it to be a completely acceptable trade-off; the queue for the hot dogs was looooong and sloooow. They were only cooking them in batches of 10 but of course as soon as people saw someone with one, everyone went to get theirs. And lots of people were queuing for their friends so were taking three (or in one case six) hot dogs at a time, meaning the length of the queue was deceptive. Some of the girls in front of me were getting a little fractious and opining that no one will come back because the queues were so bad. I thought this a little disingenuous and unfair of them. Much as I didn't like the queuing I could appreciate that this did not indicate what the normal state of affairs would be on a normal night - I have faith that when they're operating a full service, and people order as and when they want during the night instead of all rushing at once, a half-hour queue (or thereabouts) isn't going to materialise.

And so, eventually, me and my boyfriend got our hot dogs and we didn't begrudge the queuing at all in the end. Especially when as soon as I had sat back in my seat The Boy is Mine by Brandy and Monica came on. It has been years since I've heard that song and it instantly put a smile on my face. In fact, I was totally digging the music the whole time I was there - all the old 90s, early noughties swing and R n B classics working their way into some more contemporary stuff like Jamie XX's mix of Adele (love that remix). Yep, had me grooving in my seat. 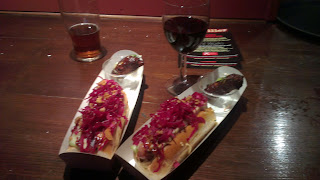 Anyway, the food. Now, over here, until recently, I haven't really considered that hot dogs exist. Not the way I know them, not US-style franks. What gets called a hot dog over here is ususally just a sausage in a bun. And I love those - I love English sausages - but it's not a hot dog. Street Kitchen claimed to be doing hot dogs, and I think they just about fall short of that criteria but what they have created is a pretty bloody good banger in a bun. Held well in a firm but not sweet bun was a layer of coleslaw and a pork sausage, lined with pickles on one side, pork belly on the other and topped with pickled cabbage and crackling. At least, I think those were the ingredients - I couldn't make out the menu with my poor eyesight. It was very, very tasty. That was a gourmet 'dog' if ever I had one. Must admit, both Stephen and I thought the cabbage on the top was unnecessary what with the coleslaw on the bottom adding crunch. It looked lovely but I mostly picked mine off and ate it on its own as otherwise it made eating the hot dog that much messier. So I pronounce this my third favourite hot dog, behind Big Apple Hot Dogs and the Dogfather Diner (whose hot dogs what I consider a 'frank' to be and also taste amazing). Street Kitchen's tasted amazing but loses points for being so 'English'.

I loved the chicken wing - it was a really good size for a wing, coated in quite a thick batter with sticky BBQ sauce and a smattering of spring onion. The sauce had a slightly lime flavour to it I believe and I really enjoyed it. Stephen didn't like his so much - he said it felt 'spongey' like too-thick fish n chip shop batter.

And then someone came around handing out free popsicles from the Ice Kitchen! They were raspberry and basil and topped with white chocolate. Unfortunately they were a bit too high quality for me, and by that I mean you could tell they were made from proper raspberries rather than raspberry juice. Which is great for everyone who likes eating raspberries, but not for me because it came complete with seeds. Bummer. Stephen had mine. 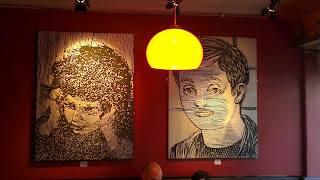 The decor reminded me very much of the Sebright Arms - it was sort of old man's working club turned cool. Mismatched chairs, those weird, red-topped flimsy-looking wooden tables, sort of a sparse feel to the place. You can imagine it's former life in which the carpet was sticky and everything stank of beer. But now it's all scrubbed up and had lovely Pure Evil artwork on the wall (gotta wonder how much that sells for these days). I liked it. 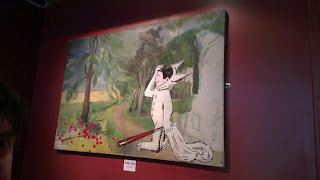 We had our third, final drink at about 9 and left at about half past as we're a little low on funds this month, so didn't end up seeing NightWorks who were keeping the party going upstairs.

But this was a great introduction to The Miller Pub and I highly recommend you go! Well done guys. Thanks for the party!