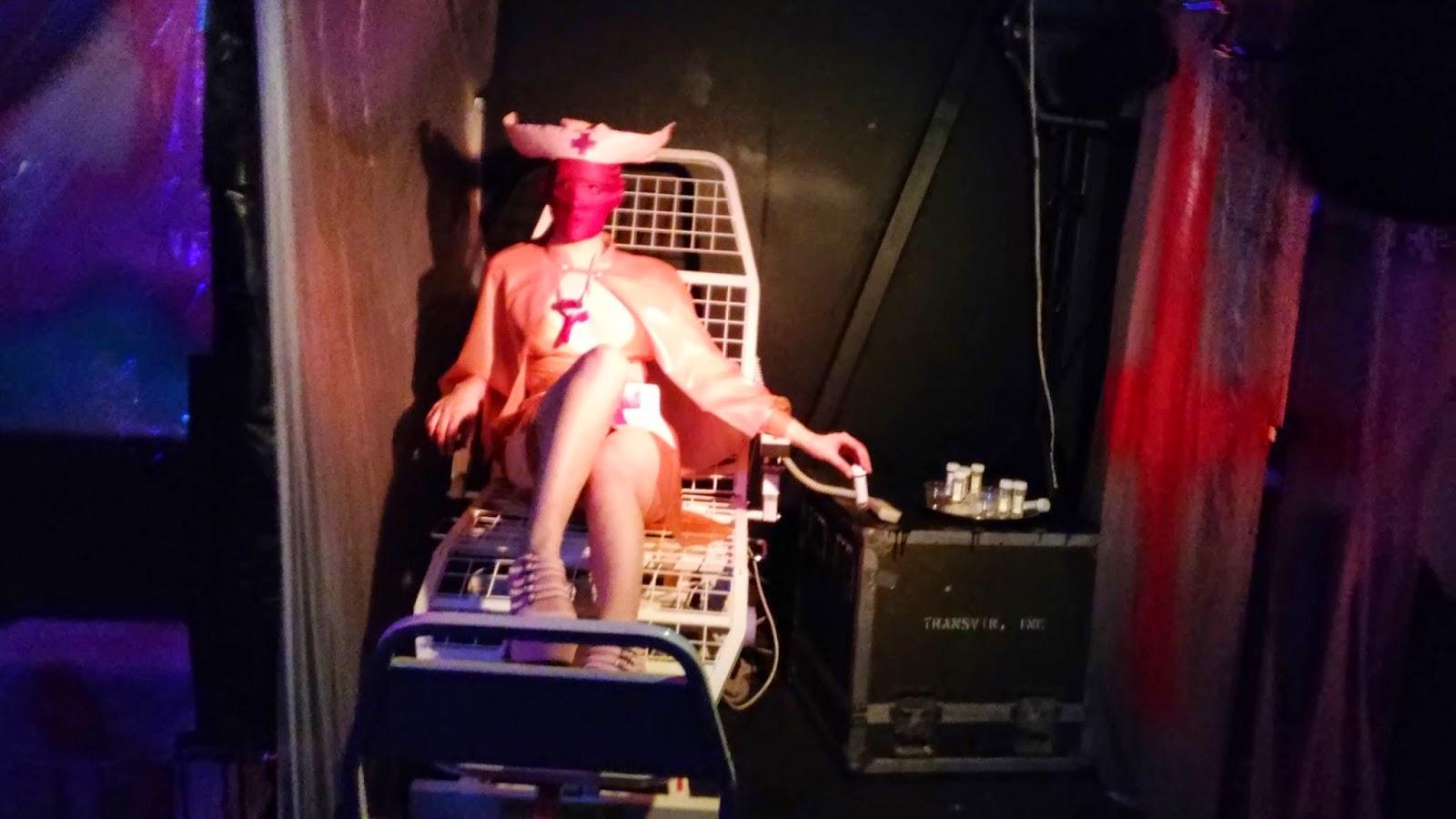 Last month saw the launch of a new night for the fetish scene called Psychoward. It was loosely based around the theme of medical ward, which meant the hosts and hostesses were all dressed up in latex medical costumes, face masks, etc and there were lots of nurses in PVC, although any sort of fetish wear was more than welcome. They had a lot of fun things set up and tongue was firmly in cheek as we had someone roaming around taking your blood pressure (for real!) and handing out pills and injections (not so real – the pills were smints). He also had love potions and pervert potions aplenty (these came with warnings not to overdose) which goes to show the fetish world is as much about being silly as it is about anything else. But it was most definitely a fetish event and had not the costumerie given it away, the other entertainment surely would. I think due to its size, there was a lot of kink in a concentrated area which gave it (for me anyway) a much more hardcore feel than Torture Garden, for instance, where you can easily lose sight of anything too shocking. 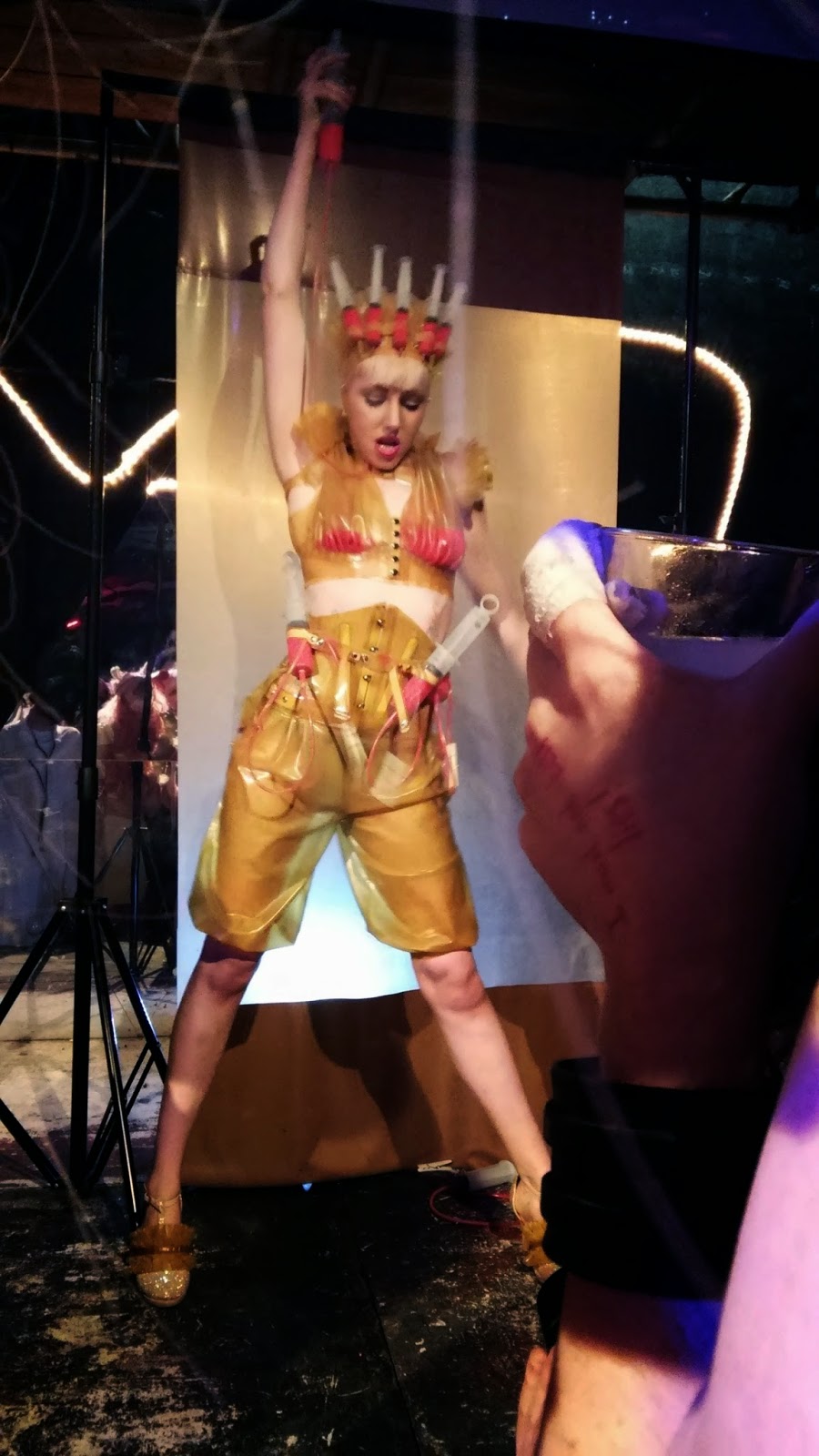 There were a couple of acts on stage riffing on the medical theme – one person dressed as an asylum patient before doing her act, and the other performance involved filling various pouches around the performer’s body with blood from syringes. It was interesting for sure. In addition to this there was something that I would term performance art happening on the edges – and somewhat interactive. A slender girl stood poised in her pen until you switched on a light and then one of two boxes in front of her would light up and she would investigate what was inside. What was inside not only delighted her but threw her into a sexual frenzy – on the one side, several pairs of beautiful shoes, on the other, gorgeous corsets. She would preen and rub herself all over them in sensual ecstasy until time ran out and she had to put them away. She had the grace and fluidity of a trained dancer (I imagine she was) and she was a joy to watch. Next to her, was something that was the exact opposite to watch but transfixing nonetheless. They had someone who was offering his body modification services for the night. One young guy sat, amazingly passively, nary a change in expression on his face, as he got a swirled pattern scarified in his leg. Then a girl had some needles inserted into her back almost like tiny wings, and posed, before having them removed again. The finale of the night was for this guy to perform his body art on himself (with a little help). I can think of no other way to describe it than say he turned his penis inside out and created a ‘vulva’ out of it using piercings to hold the ‘lips’ in place – piercings he did himself. Then he took them out and nailed his scrotum to a wooden board with the help of an assistant. He stood and wiggled that a bit before having his assistant take them out. The last one got caught and you could tell it must have smarted a bit. 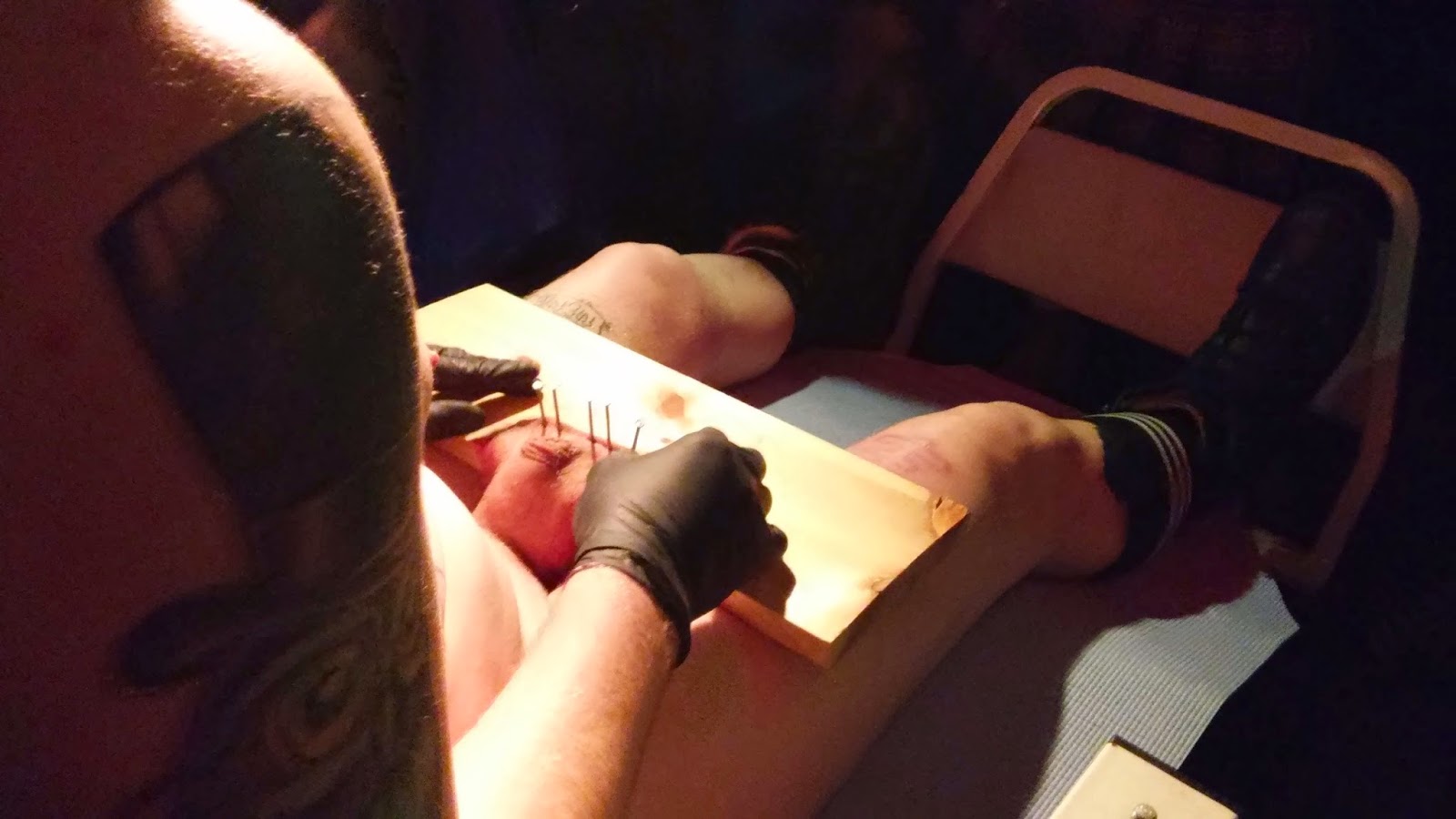 After that all that was left was to mingle and get on the dance floor. They were playing a mix of rock and darker 80s music, which wasn’t exactly my thing but also made a nice change from the typical drum n bass. I danced a little but called it a night earlier than usual as I actually had plans for the next day that weren’t just lying in bed waiting to go out again at night. Apparently the dance floor did pick up a bit after I left. There were also some arty visuals around the place for your optical delight and disturbance. 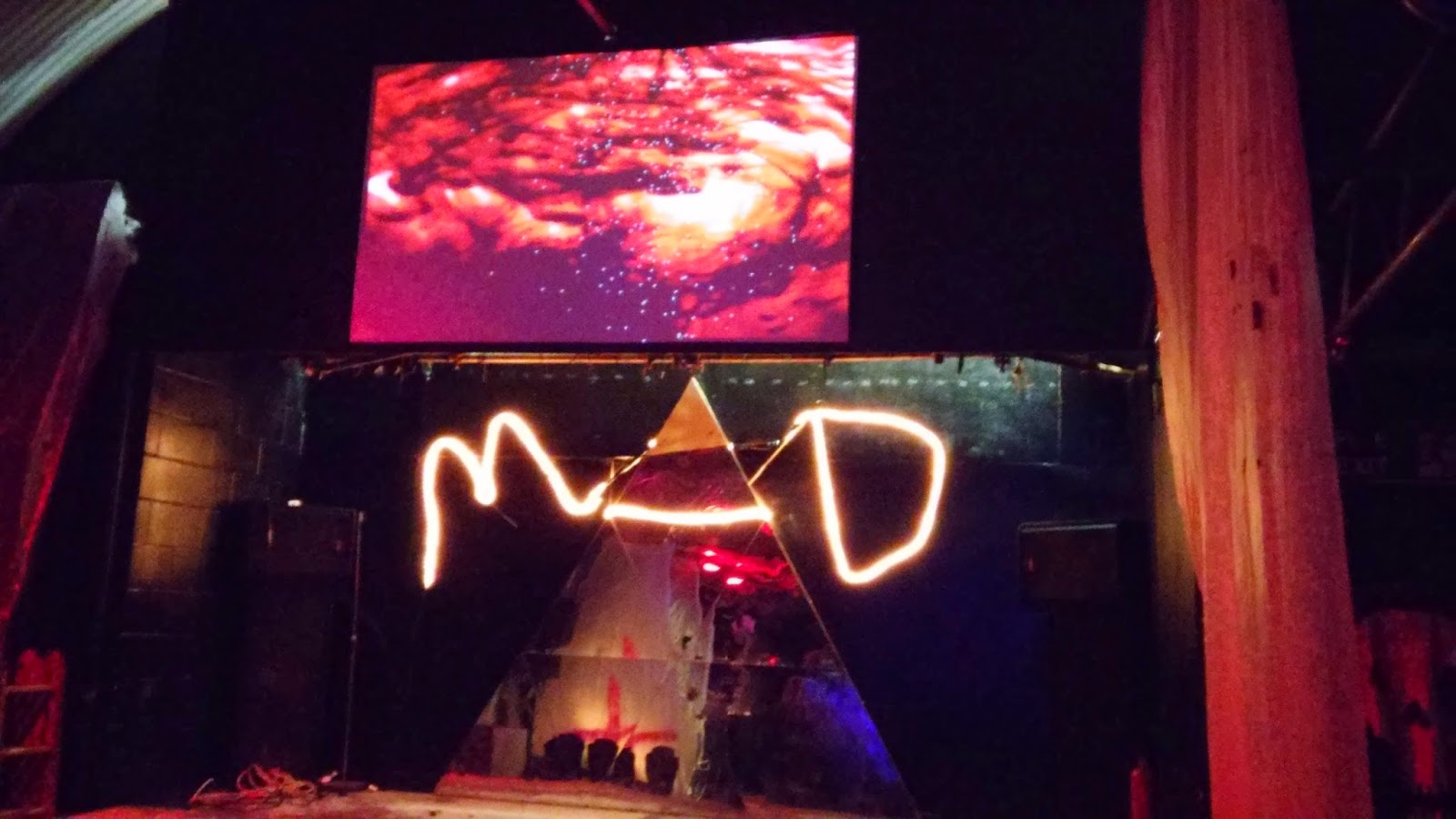 Tickets were £15 on the door, which I thought was good value for the entertainment provided. Drinks were eyewateringly cheap – you got 3 drinks for 10 quid I think, and you didn’t even have to order them all at the same time. You could get a token for the others if you weren’t ready for them yet. We were really worried we wouldn’t get in so turned up about half an hour after the doors opened (at 8). Everyone else was far cooler and turned up at around 10 but the drinks were so cheap no one minded being in there while it was filling up! A seriously different night out.
Posted by Ginglesnuff at 12:27 PM